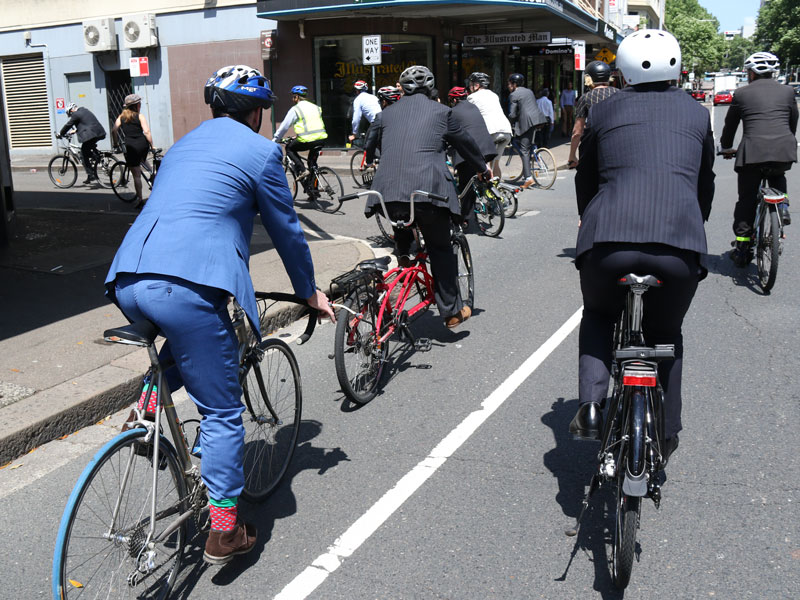 Cars may be forced to give cyclists 1.5m when travelling over 60km/h. Photo: AAP

UPDATE: About 14 cyclists are killed each year in New South Wales and a little over one a day injured badly enough to need hospital treatment.

As dangerous pursuits go, cycling is arguably not the most perilous – at least not in a state with a population of more than 7.5 million.

Yet as of March 1, the state government hiked the fines for offences such as not wearing a bicycle helmet by more than 335 per cent, from $71 to $319.

And the fines for running a red light, riding “furiously”, or failing to stop at a pedestrian crossing shot up from $71 to $425, with similar increases for motorists who fail to leave at least a metre when passing a cyclist.

Not surprisingly, there’s been plenty of reaction to such huge increases.

So what’s the ‘behavioural economist’ – or ‘nudge’ expert – view on the hike?

Pioneering economist Professor Robert Slonim of Sydney University says it seems the government is opting for “shock and awe” tactics to get cyclists’ attention.

“It’s debatable whether this approach will be effective if it’s seen as disproportionate. Imagine a family of four going out for a short bike ride down to the beach facing a fine of more than $1000?”

But road safety authorities say there should be “zero tolerance” to non-compliance, though Bernard Carlon, executive director of the NSW Government’s Centre for Road Safety, realises it is up to police enforcing the law to decide when to issue warnings and when to slap big fines on lawbreakers.

“The motivation behind the fine was to change behaviours,” he said. “We had a round table talk with all the cycling organisations, the NRMA and the Pedestrian Council … and it was agreed the level 1 fines [$71] were not a sufficient deterrent.”

Not all agreed on the size of the new fines, he said, but after analysing the data it was decided to make the scale of the fines for the most serious five out of the 101 cycling offences the same as for other road vehicles.

No consideration was given to different scales of fines for different offenders and Mr Carlon does not believe riders caught without helmets pootling down to the beach should be treated any differently.

He said the centre’s research showed a helmet – which costs as little as $8 – increased a cyclist’s protection by 70 per cent.

“As one caller to talkback radio said, ‘Obeying the law is no big deal’.”

Asked whether the new fines would discourage the growth of cycling, he said: “The number one issue – and we’ve done research on this – that actually inhibits people from taking up cycling is a concern about safety and we’re attempting to make a safer environment.”

The National Cycling Strategy aimed to double participation between 2011 and 2016. But the latest annual survey of more than 25,000 people shows no significant change in five years and perhaps a slight decline.

Ray Rice, chief executive of Bicycle NSW, welcomed the minimum passing distance rules, but said it was “unfortunate that the message behind the massive fine increases and future mandatory photo ID [cyclists will have to carry] has not been encouraging to greater cycling participation”.

He said better road use education and cycle infrastructure would be a preferred strategy.

Professor Slonim said behavioural economics has found that people tend to respond more to a negative, such as fines, than to an incentive.

“Even so, there’s lots of ways to get people to wear helmets, from subsidies to bike sales requirements,” he said.

NSW Police have no statistics yet on how many of the super-sized fines have been issued since March 1 but the jury is out on their impact.

*An original version of this story had two cyclists dying each year in New South Wales. This figure has been corrected. ‘Shock and awe’ tactic not helping in bicycle safety campaign