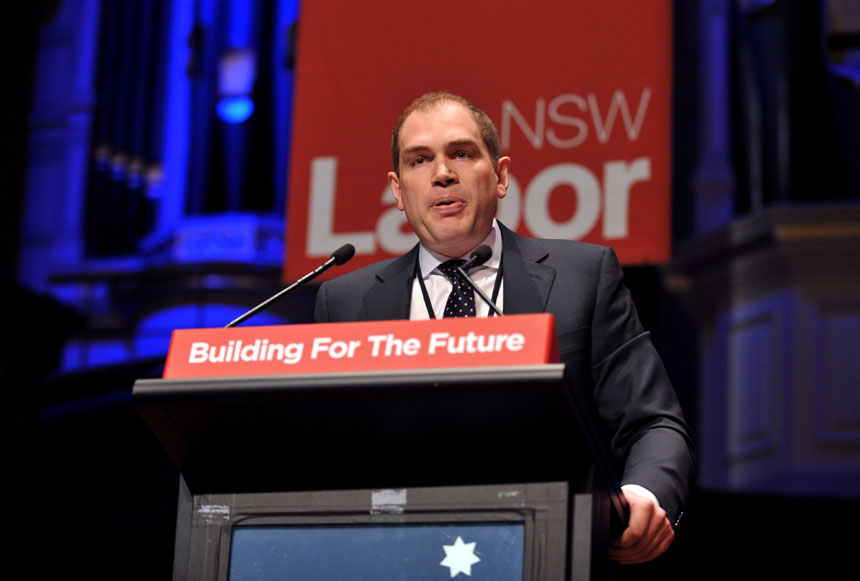 Apprehended violence order proceedings against Mr Clements were dropped on Wednesday, after a last-minute deal was reached.

He was accused of pushing Labor staffer Stefanie Jones against a wall and trying to kiss her in June last year, a claim which he denies.

The woman who made the allegation against Mr Clements said she hoped his resignation would mark a change in the Labor Party’s attitude to women.

“Thank you to my family, friends and colleagues for all the support you have provided (fiancé) Dave and I over the past seven months,” Stefanie Jones said in a statement.

“Without you we wouldn’t have survived.

“Today marks beginning of much more hopeful and dynamic chapter for women in the ALP.”

Mr Clements stressed his resignation was not an admission of guilt.

“While I have done nothing wrong, I have made this decision in the best interests of the party and my family,” he said.

“The version of events reported in media outlets today is completely false. This matter was the subject of a thorough police investigation and a separate independent investigation conducted on the balance of probabilities, neither of which resulted in any charges or findings of wrong doing on my part.

“I agreed to undertakings in order to spare the party, my family and all those involved, a difficult and traumatic legal process. Those undertakings were made on a strictly no-admissions basis.

“Throughout this process I have maintained a dignified silence. I am disappointed that others chose not to – instead using the media to pursue their agenda.

“But no individual is bigger than the party – which I have served for 18 years – and I do not want the Party to be distracted from its focus of winning the 2016 federal election.

“I want to thank those within the party, and beyond, who have maintained their support for me and the principles of natural justice. And, in particular, I would like to thank my family.”

No details of his exit package have been made public.

Mr Clements told the ABC earlier on Thursday that he had not resigned, but he was facing pressure from a number of Labor figures.

It is understood Federal Labor leader Bill Shorten had wanted him gone.

Mr Shorten spoke on the continuing scandal, stating that he had requested a report on the incident from the NSW Labor branch.

He said that he expected the matter to be resolved, adding: “I have no tolerance for workplace harassment in any set of circumstances.

“This morning I have contacted the state president of the NSW Labor Party and asked him to provide a report to my national secretary on matters relating to NSW.

“The NSW branch has been handling this matter, it’s a party matter … I have now stepped in.”

Mr Clements released a statement on the matter on Wednesday, saying that the deal was not an admission of guilt on his part.

“I have cooperated fully through this process and am pleased it has reached a resolution which allows all involved to move forward,” he said.

“I have always contested the version of events which has been publicly reported and the agreement reached today is without admission on my part.

“Having had discussions with my family and colleagues, I have decided this is the best way to move forward and focus on the challenges of 2016.”

The allegations follow the resignation of Federal Liberal MP Jamie Briggs from his portfolio after a late-night incident involving a female staffer in a Hong Kong bar.