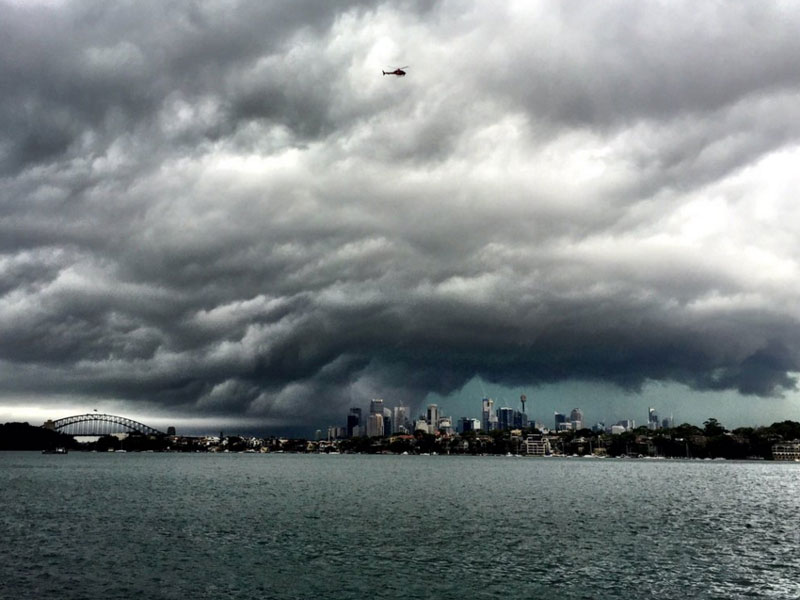 The storm cast an ominous shadow over Sydney. Photo: Twitter

Three people are injured and Sydney’s desalination plant has been damaged after a tornado tore through the city’s south with winds at 213km/h.

The Bureau of Meteorology (BoM) issued a tornado warning for Sydney at about 10.30am, as a severe thunderstorm was heading toward the New South Wales capital.

The desalination plant in Kurnell was evacuated after reportedly sustaining significant damage and workers were also cleared out of the Caltex refinery.

They were all transferred to Sutherland Hospital in a stable condition.

The southern Sydney suburb has been declared a disaster zone by authorities.

The destructive tornado comes just one month after a similar warning was issued in Melbourne.

Westfield Bondi Junction was evacuated after part of the roof collapsed at about 1.40pm.

Destructive winds, large hailstones and very heavy rainfall may also lead to flash flooding over parts of New South Wales on Wednesday, according to the BoM.

Sydney, Nowra, Parramatta, Wollongong and Bowral were expected and by late on Wednesday morning, the storm had already wreaked havoc.

Emergency service crews were called to Maroubra after a balcony collapsed and the roof of a unit damaged.

“All the bricks came crashing to the ground. The roof’s caved in, the windows had blown away,” neighbour Amanda Flynn told the Sydney Morning Herald.

NSW SES were called to more than 160 jobs across the state, with the most affected areas being Sutherland, with 65 jobs, St Georges Basin with 39 and Randwick with 30.

Earlier on Wednesday morning, 80mm of rain was recorded in just one hour south of Nowra, while wind gusts reached 91km/h at Bellambi Point just after 9am.

Batten down the hatches. #sydneystorm https://t.co/QDCQGb2RWd

.@guardianaus reader Claire Milet took this, of people getting out of cars to walk to #SydneyAirport in #sydneystorm pic.twitter.com/7GbkszdJcp