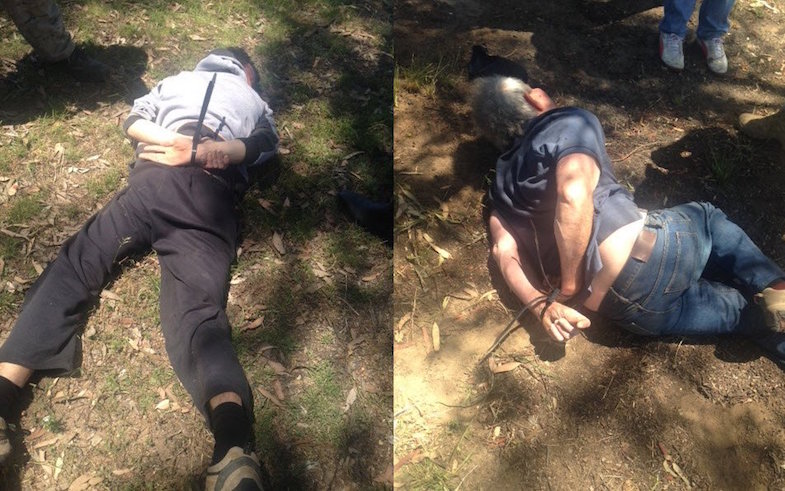 Police have found a dead body on the property where the two of Australia’s most wanted men fugitives were arrested.

Police caught up with Gina and Mark Stocco, father and son, near Dunedoo, about a four-and-a-half hour drive from Sydney, on Wednesday morning.

The pair were arrested about 12pm at a farm on Tonniges Road, Elong Elong – more than 400km from their last confirmed sighting at South Gundagai.

• Police plea on missing pair
• Stoccos likely to be ‘running out of money’
• Hunt for armed father, son fugitives continues

After the arrest, NSW Police confirmed a body had been located on the property where police arrested Gino, 57, and Mark, 35.

They said the body is believed to be that of a 68-year-old man, who has been missing since October 8.

The cause of his death is not yet known.

NSW Acting Assistant Commissioner Clint Pheeney said police were treating the death as a murder investigation and a crime scene had been established at the property.

He said the police were tipped off to the whereabouts of the Stoccos by a family member of the deceased man in Sydney.

“[The Stoccos were found] with information supplied by another member of the community which has actually led us directly to that property, Acting Assistant Commissioner Pheeney said.

“And that member of the community actually resides in Sydney.”

He confirmed the Stoccos had previously been sighted on the property.

No shots were fired and no one was injured during the “covert operation” in NSW.

NSW Tactical Response police surrounded the pair and lured them outside.

Acting Assistant Commissioner Pheeney said there “was some resistance” from the Stoccos to the police arrest.

The fugitives were reported to have previously worked the farm they were arrested at.

Police said the men would be taken to Dubbo Police Station to be charged.

Victoria Police confirmed the arrest and thanked the community for “invaluable” assistance provided to police.

“The information provided over the last week was invaluable to police,” a spokesperson said.

“The multi-jurisdictional search further highlights our commitment to a “no border” approach to investigations within Australia.”

The renewed hunt for the Stoccos, who have been on the run for the past eight years, was sparked after they shot at police on October 16.

They allegedly rammed a police car six days later, after officers set up a roadblock near St James.

The men were wanted on 13 offences each, including attempted murder, arson and fraud.

Before their run-in with police in October, the pair were wanted in three states, for incidents dating back to 2007.

But they managed to avoid the authorities, reportedly moving around the country doing short-term farm work.

Prior to their arrest, the last confirmed sighting of the Stoccos was on Saturday night, at a service station in South Gundagai, when they allegedly stole $200 of fuel.

Over the past fortnight, police believed the pair travelled hundreds of kilometres each day in a Toyota LandCruiser 4WD, suspected to be stolen from a property in Holbrook, in an attempt to avoid arrest.