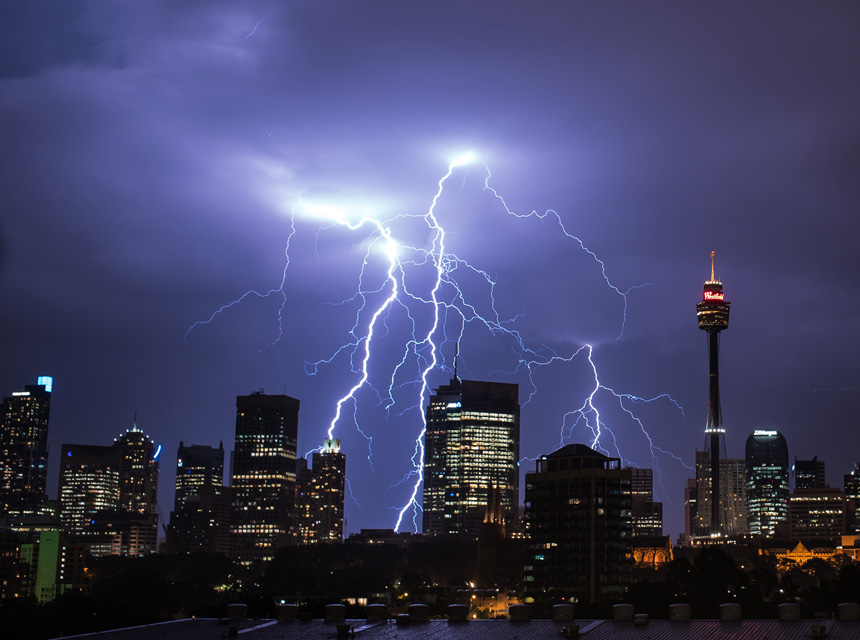 Two women struck by lightning in Sydney are recovering in hospital, after storms swept through the city on Tuesday.

A woman, believed to be in her 20s, was hit by lightning in the inner-city suburb of Newtown around 6pm on Tuesday and was taken to Royal Prince Alfred Hospital.

She remains in a serious but stable condition.

• Mike Baird goes Back to the Future in DeLorean
• PM pushes on with loath Abbott cuts
• Wanted father, son ‘seen’, in Victoria

Another woman was struck at St Mary’s Hospital in Sydney’s west at 5pm, an ambulance spokeswoman said.

The extent of the injuries to both women is unknown. More than 30 calls for help were made to the SES overnight.

But, a sunny respite for the city might not last too long.

The Bureau of Meteorology said sunny skies on Wednesday will remain until mid-afternoon, but after that, they are predicting thunderstorms.

Most of the state, except the far north east and west, can expect storms and damaging winds, BoM said.

And it wasn’t just humans who were in harms way of the lightning.

A Qantas passenger plane was pictured flying seriously close to the stormy shards.

The images were captured by photographer Daniel Shaw. Below is the photo and video he captured:

Another terrifying image of the @qantas lightning close call in Sydney Australia. pic.twitter.com/0zTNEuEHdx

VIDEO: Close call for @Qantas aircraft after lightning strikes nearby during landing in Sydney Australia. https://t.co/U87ULMdBJZ

“It looked really close,” Mr Shaw told Fairfax Media. “It is hard to tell how close it come. It was possibly a kilometre away, possibly less.

“There were a few rogue lightning bolts coming out from a number of storm cells.

“My car was needed as a refuge, as a number of bolts did hit very close to my area and that was my only safety.”

Mr Shaw described himself as a professional storm chaser.