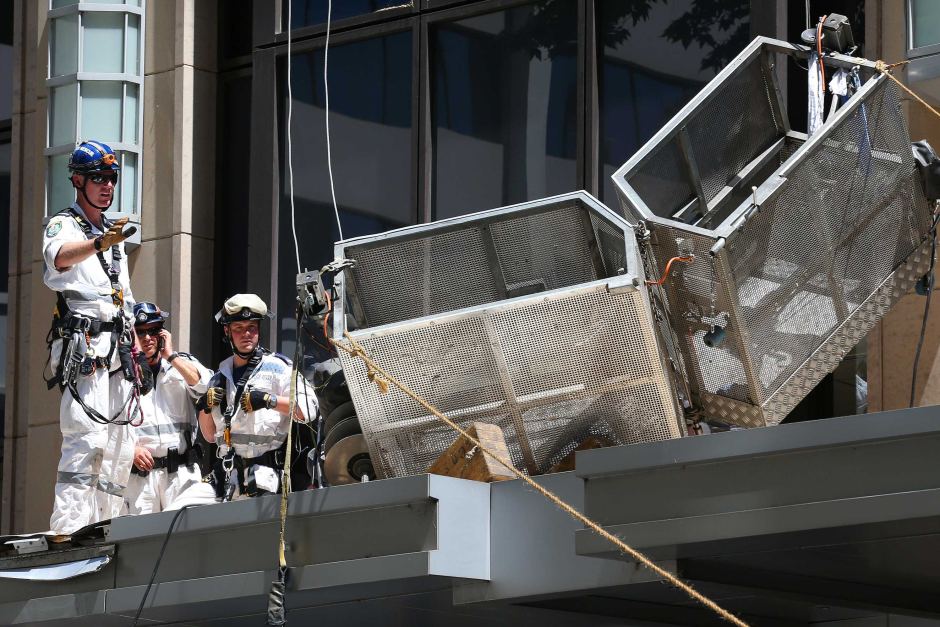 Witnesses have spoken of their horror at seeing two window cleaners fall more than 10 storeys down the side of a Sydney CBD building on Tuesday morning.

Emergency services were called to a building on the intersection of Pitt Street and Bridge Street at 11:15am following reports the two men had fallen onto an awning.

The men, who were in a metal window-cleaning cage positioned at the top of the building, when a cable snapped.

“We all looked out the window, the cable had snapped and we saw the whole scaffold with two guys plunge straight down … we heard the thump,” said Con Triantafillou, who works across the road.

Mr Triantafillou said one man crashed onto the awning and the cage landed on top of him, while the other man was left dangling by his harness from the awning.

He said both men were moving but there was a lot of blood on the cage.

“He ended up being about three metres off the floor. If the harness wasn’t there, he probably would have died,” another witness Paul Sleiman said.

“People just rushed towards them. The tough thing was because they were so high up nobody could really help.”

Bystanders managed to reach the man who was dangling from the awning by using a ladder and got him down before emergency services arrived.

Both men have been taken to St Vincent’s Hospital in a serious condition, an ambulance spokeswoman said.

Police have reopened Pitt Street between Alfred St and Bridge St, which was closed earlier as a precaution.

Worksafe NSW has been notified.