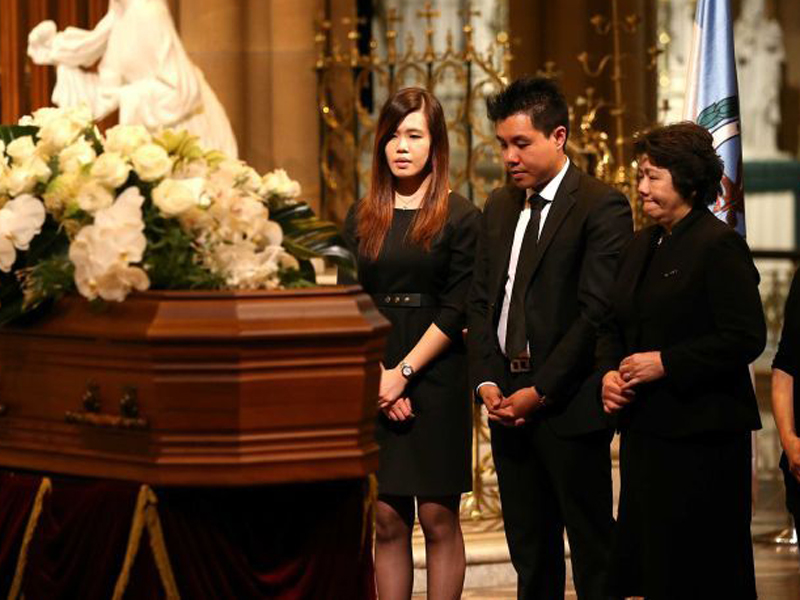 Family, friends, colleagues and the public were among 1,500 people who paid their respects to Mr Cheng, who NSW Police described as a “respected and long-standing police employee”.

The 17-year police force veteran was shot and killed by 15-year-old Farhad Jabar outside NSW police headquarters in Parramatta on Friday, October 2.

Two Sydney men are now facing charges in relation to the shooting.

The Catholic Archbishop of Sydney, Anthony Fisher, led the service and described Mr Cheng as a “gentle, loving family man”.

A man who loved his work and cherished his family. A man who didn’t take his good fortune for granted…at least while it lasted.

“That any innocent person could be shot dead in our city appals us,” Archbishop Fisher said.

“It was an attack not just on Mr Cheng and his family but on the police force and the whole community… it was intended to shake our police force, shake us all.”

Commissioner Scipione said October 2 was the Friday before a long weekend. Many people were getting away early, but Mr Cheng stayed back a little later than usual to work on the budget.

“Improbable and unjust things happen… but when they happen they invariably happen to someone else… but Curtis was one of our own,” he said.

“The NSW police force has lost a much loved member of its family.

“I can’t describe the devastation inside police headquarters.”

Commissioner Scipione said Mr Cheng was “the gentlest of friends lost to an act of terror”.

“A man who loved his work and cherished his family. A man who didn’t take his good fortune for granted… at least while it lasted,” he said.

“Curtis’s fate reminds us that life is fragile.”

‘Dad was a family man and always put us first’

“Dad was an unassuming man and would never have seen himself as deserving of such attention, kind words and tributes,” Mr Cheng told the congregation.

“During this time, we as a family have mourned. But we have also been able to celebrate the life we have shared with him and the little things that matter to us.”

“I have come to appreciate even more the man I am proud to call my father.”

Mr Cheng said his father was a tremendously dedicated and patient person and was described by his colleagues as a great mentor.

“In Hong Kong when I was young, Dad worked two jobs to save up for us to emigrate to Australia,” Mr Cheng said.

“My Dad has worked incredibly hard and was the go to person for his colleagues because of his reliability and resourcefulness.

“People liked being around him because if his calm … and positive outlook.”

“Above all Dad was a family man and always put us first,” he said.

“He devoted so much time to my sister and I, and he put effort into understanding us as individuals.

“We have great memories of him cheering us on at our Saturday sports games.

“He believed in spending quality time with each other. During dinner time the TV was always off… we’d discuss things that we had done, things that we were thinking about, things we want to do.”

At the conclusion of the service, police formed a guard of honour along the main entrance to the cathedral.

The Australia Federal Police Commissioner Andrew Colvin joined the mourners, along with police commissioners from the Northern Territory, Victoria and Queensland.

NSW Premier Mike Baird joined the Prime Minister in sending his thoughts to the victim’s family and friends.

“A colleague and friend, it is going to hurt, and hurt very deeply.”

Last week more than 30 people attended a candlelight vigil outside the offices where the fatal attack took place, organised by the Multicultural Communities Council of NSW.

Council board member Amarinder Bajwa said those gathered came from a range of backgrounds including Chinese, Indian, Sikh and Pakistani.

“We wanted to show our solidarity and support for not only the police but also the family of Mr Curtis Cheng,” he said.

“The Chinese community has lost a son. May he rest in peace,” he said.

‘Gentle friend who was lost to an act of terror’