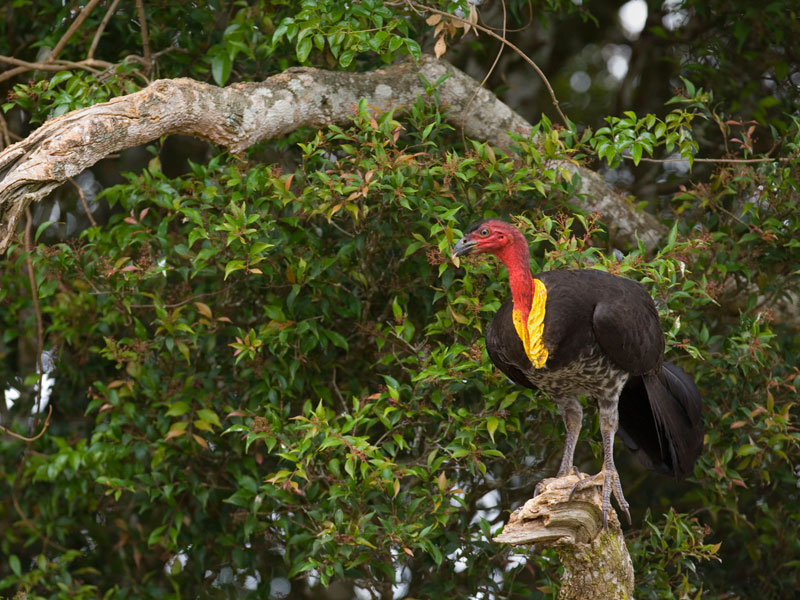 They’re sexually prodigious and prolific. They ruthlessly desert their offspring at birth. They’re detested by mild-mannered gardeners along Australia’s east coast. And they’re steadily invading the suburbs of Sydney – just as they invaded Brisbane a decade ago.

In the past five years, the Brush turkey (often mistakenly called ‘the Bush turkey’) has steadily moved from the national parks and bushland surrounding Sydney, to harbourside suburbs such as Mosman and Cremorne (Bradley’s Head is a breeding ground).

• Emu chomps on US tourist, who cowers in fear
• Five things to plant while spring is still young
• Tasmania swift parrot faces extinction

The bird has even been sighted in that inner city urban jungle, Newtown.

This sudden expansion of territory has prompted fears that – like the Cane Toad, Ibis and Indian Myna – they’re relentlessly moving down the eastern seaboard.

In their wake they leave a trail of frustrated humans whose lovingly-planted gardens have been devastated by those destructively large claws (megapode, after all, means “big foot” in Greek).

How far will these Triffid-like creatures spread? And are they as terrible as they sound?

Absolutely not, according to one expert.

German-born scientist Ann Goeth – one of the world’s leading experts on the Australian Brush Turkey – insists our largest native megapode is one of the most interesting birds on the planet.

“I find them endlessly fascinating,” she said from the safety of Concord (no sightings yet).

“Only in megapodes, and South American duck species, do chicks grown up without any parental care. Brush turkey chicks are just abandoned. They have to dig their way out of the mounds, which can take them two days.

“They behave independently from the moment they hatch. And they can fly as soon as they emerge from the mound.”

Male with the best mound wins

It was this lackadaisical parenting which prompted Dr Goeth to study the Brush turkey for her PhD. She co-wrote a book Mound-builders while she continued her research at Macquarie University.

“Their mating behaviour is unusual,” she explained.

“The Brush turkey is polygamous. The way it works is that the females wander around and inspect the mounds to determine if they are good for breeding.

“If they like a mound, they’ll dig a hole and lay their egg there. But the entry fee is that they have to mate with the male which built the mound.

“That male gets to fertilise the next egg, not the egg she is leaving in his mound which might have been fertilised by a previous male.”

So the female Brush turkey is only impressed by the size of a male’s mound?

Each female lays only one egg at a time because the eggs are so large compared to her own body weight. However she can lay her next egg just four or five days later.

Nobody really knows how many chicks are born to a typical female each breeding season, Dr Goeth said.

“But they have more chicks than other birds because they don’t have to sit on the eggs to incubate them. The mortality rate is high: up to 90 per cent of chicks are killed – mainly by cats.”

The Brush turkey’s mounds – built and tended to by male birds – are a feat of considerable combustible engineering.

However it is this mound-building – and the destruction involved in construction – which most upsets human settlers.

“The mounds are very large, up to five metres in diameter and up to two metres high,” Dr Goeth said.

“They’re mainly made from organic material which the male birds scratch together. Inside the mound, heat is provided by fermentation, sufficient to incubate the eggs.

“If it’s too hot, they’ll open up the mound to make it cooler. If it’s too cool, they’ll pile more material on top.

“There’s anecdotal evidence they can forecast heavy rain and storms because they’ll place more material on top of the mound before a downpour.”

What we are witnessing now is the Brush turkey venturing back into areas that it used to inhabit before European settlement.

In the 19th century, the birds could be found as far north as Cape York and as far south as Jindabyne and Cape Howe. Now the furthest south they’ve been seen is the Cambewarra Mountain near Kangaroo Valley.

Experts put the recent revival down to several factors.

An end to human hunting in the 1970s reduced numbers of natural predators such as goannas which eat the eggs, even unscrupulous residents trapping them on their own land and illegally moving them – like possums – to neighbouring suburbs.

Want to know how to turkey proof your garden? Click here

Dr Goeth said one reason why we’re seeing them appear in new suburbs is the trend towards more drought-resistant gardens.

“Brush turkeys love native gardens with more native plants and mulch. They need to find moist material for their mounds,” she said.

The relentless spread of the Brush turkey has led to some awkward situations.

One bird made its mound in a Sydney graveyard. Dr Goeth also has a photo of a terrified man sitting in his Cadillac while an adult male bird stands on the bonnet attacking his windscreen.

“It must have seen its own reflection in the glass and thought it was a rival,” she said.