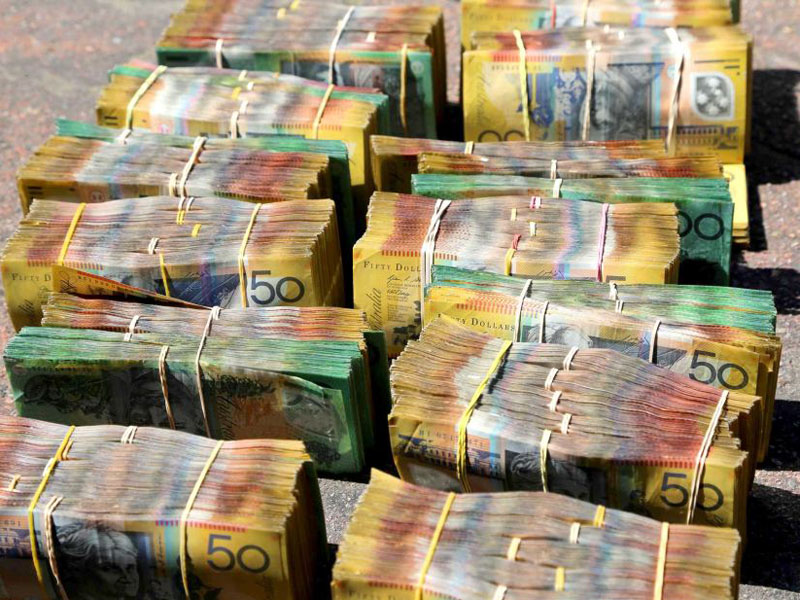 Investigators seized a large amount of cash in addition to guns and the alleged drug shipment. NSW Police

Those arrested were aged between 21 and 65, and have been charged with a range of offences, including smuggling and dealing with the proceeds of crime.

Police said the group helped smuggle large quantities of illegal cigarettes and tobacco into Australia, including a shipment of 9 million ‘Manchester’ branded cigarettes from the United Arab Emirates, which arrived at Port Botany this month.

The cigarettes had a black market value of about $5.4 million.

It is alleged employees attached to Customs brokerage companies and freight-forwarding firms were paid tens of thousands of dollars to create false declarations and shipping documents to enable the importation.

AFP Acting Deputy Commissioner Operations Ian McCartney said the shipments of illegal cigarettes and tobacco had been collected by a local syndicate and was bound for the black market in Sydney.

“The key aspect for us is the tax not being paid to the Commonwealth Government,” he said.

The syndicate had avoided more than $9.1 million in Customs duties.

The syndicate was also allegedly involved in the supply of commercial quantities of cocaine.

About 270 grams of cocaine was seized during the investigation, with a street value of about $184,000.

Detectives also seized more than $700,000 in cash during the investigation.

Deputy Commissioner McCartney said the AFP had been working with its partner agencies to restrain $2 million in assets, including personal and business bank accounts as well as houses owned by individuals charged with involvement in the syndicate.

“This operation has shut down a significant syndicate allegedly involved in facilitating the importation of illicit goods into the country and distributing those goods into the community, as well as trafficking in commercial amounts of prohibited drugs,” Detective Superintendent Bingham said.

“This is a sophisticated syndicate. Obviously with tentacles here plus overseas, so there’s a lot of overseas inquiries ongoing in relation to this matter,” he said.

Three men are due to face court on Thursday on drugs and smuggling charges. The rest of the alleged syndicate will face court in October.