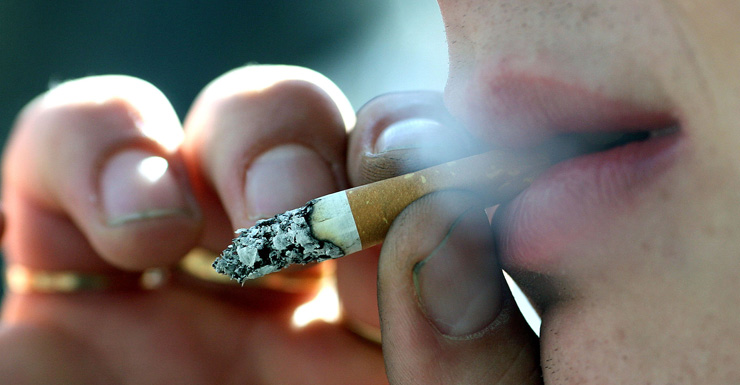 Nick Xenophon says a change to the legal smoking age would save hundreds of millions of dollars. Photo: AAP

New NSW smoking laws which make it illegal to light up in outdoor dining areas has cafe and bar owners concerned for their safety.

From Monday, smoking will be banned in commercial outdoor eating areas such as pubs, clubs and cafes, and within four metres of eatery entrances state-wide.

But Sydney cafe and bar owners told News Corp they were worried about their own safety when they effectively ­become frontline anti-smoking ‘‘police’’ on Monday.

Officials said inspectors will enforce the ban, however NSW Health confirmed proprietors and managers will be required to stop people from smoking in smoke-free areas.

They will also be required to ask people to leave if they continued to smoke.

“Will a 22-year-old waitress be willing to tell a group who are spending $100 that they can’t smoke,” Katerina Efthimiou, manager of the Courtyard Cafe at the MLC Centre, told News Corp.

“If smokers get a bit angry I’m concerned the blame will shift to the owners of the cafe rather than those who made the policy.

“Our customers are going to have to smoke somewhere else, or miss out on coffee, and that could affect business.”

The NSW Cancer Council on Monday welcomed the restrictions and said there was no safe level of second-hand tobacco smoke.

“We are delighted that second-hand smoke will no longer be a worry for patrons,” the Cancer Council’s head of tobacco control, Scott Walsberger, said.

Those caught in the act will be hit with a $300 fine, while businesses could be penalised $5,500 if they ignore the ban.

The bans apply to any ignited smoking product including cigarettes, pipes and water-pipes.

Meanwhile, the Victorian Government’s strong stance on smoking allegedly caused a violent riot at a maximum security jail last week, as smoking bans came into force within prisons on Wednesday.

About 300 inmates – some armed with bats and sticks – protested against the state-wide bans at Melbourne’s Metropolitan Remand Centre in Ravenhall, causing millions of dollars of damage and leaving several people injured.

The government has previously ended the right to light up in Victorian playgrounds, skate parks, swimming pools and outdoor sporting events, and around schools, hospitals, courts and police stations.

The City of Melbourne has smoking bans in place at selected laneways in the CBD.