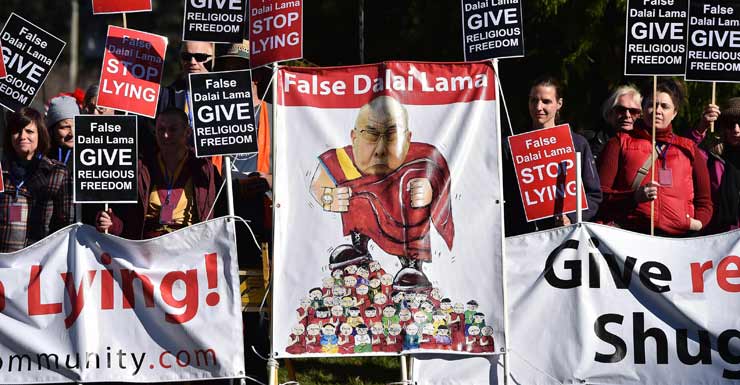 Buddhists from an out-of-favour branch of the religion with suspected China links have protested the Dalai Lama’s visit to a function centre in the Blue Mountains, west of Sydney.

About 100 Shugden Buddhists including nuns and monks were outside the Leura Fairmont Resort in the Blue Mountains on Thursday morning when the Dalai Lama arrived to greet supporters.

The Dalai Lama is kicking off his visit to Australia, which includes public talks in the Blue Mountains, Brisbane and Perth.

The protesters say Shugdens have been mistreated in Tibetan exile communities because the Dalai Lama banned them from worshipping the fierce spirit known as Dolgyal (Shugden).

The conflict inside the religion has been focused around revenge on the Dalai Lama for a death that occurred about 600 years ago, according to the Dalai Lama’s website.

The Shugden branch has been most active when a strong Dalai Lama is in power, such as the fifth, the 13th and the current one, the website states.

There have been allegations the Shugdens are aligned with China, and a letter titled ‘China gives Tibet religious freedom’ on the Shugden’s website – penned by the Tibetan Autonomous Region Communist Party Committee Office – doesn’t offer much argument.

As a tip, the letter advises Shugdens: “We must unflinchingly and thoroughly remain committed to the Party’s religion policy in order to promote mutual adaptation between Tibetan Buddhism and the socialist society.”

International Shugden Community spokesman Nicholas Pitts said: “We’re very happy how it’s gone. We’ve made our message loud and clear. He saw us, he heard us and hopefully we can put the ball in his court and he has to respond.”

Mr Pitts said in some places Shugden Buddhists are banned from government positions and refused services in shops and even hospitals.

The protesters will also be gathering on Friday and Monday at a public talk in Katoomba and possibly mounting demonstrations at other events.

“We want him to enter into a dialogue with us. Hopefully we can find some solution.”

The Dalai Lama arrived in Australia with Hollywood star Richard Gere for a 12-day tour of the country.

Speaking to reporters at Sydney Airport, Gere said his Holiness would be giving “very high teaching, experiential, something extraordinary – so it’s worth coming this far”.

Fairmont Resort general manager Bernie Boller said his arrival had been very exciting for the staff and community.

And as for the protest, he said it has been peaceful and hasn’t caused disruptions.

Why would anyone hate the Dalai Lama?