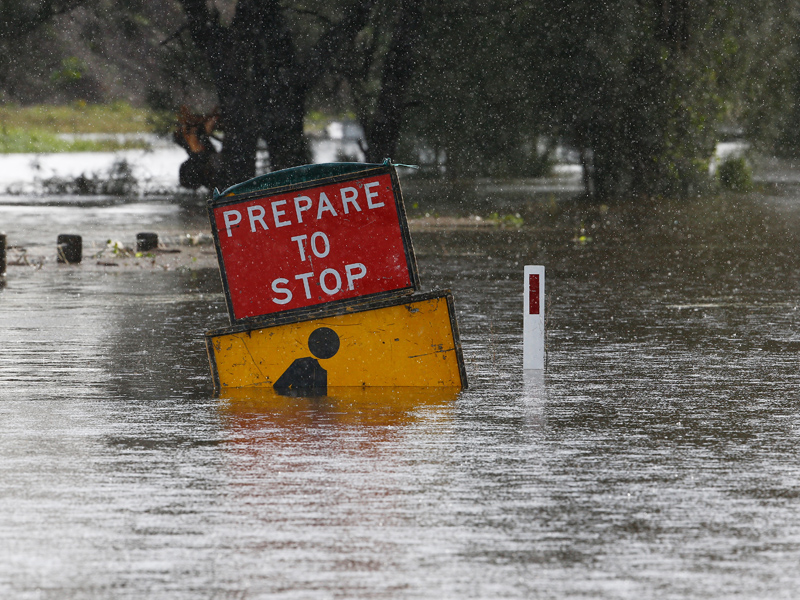 Blue skies have begun to emerge in New South Wales following the state’s worst storm in a decade but residents have been warned there are still “difficult hours ahead”.

“We’ll still have a lot to get through over the next 48 hours.”

More than 200,000 houses are without power, while a number of homes have been washed away by flash flooding.

Mr Baird said parts of NSW would be declared natural disaster zones and those affected would be able to apply for assistance and grants.

Three people died in flood waters on Tuesday in the NSW Hunter region with another two people reportedly missing after a car washed away in a creek on Wednesday.

“Obviously the areas particularly impacted in the Hunter, Newcastle and across the Central Coast, we ask those communities to hang tough,” Mr Baird said.

Winds of up to 100km per hour have caused widespread destruction across the state.

“We’re not through the weather yet. We’ve seen the worst of it and we have seen it abate but we will see some challenging weather though the next few hours.”

Mr Dent said there was still potential for flash flooding, with the SES focused on Newcastle and the northern part of NSW.

There were also concerns for homes along the Georges River, but Mr Dent said the water level was being watched closely.

Both Mr Dent and Mr Baird pleaded with residents to avoid driving through floodwater.

The warning comes as grave fears are held for two people believed missing after driving through floodwaters in Maitland.

A search and rescue mission is underway.