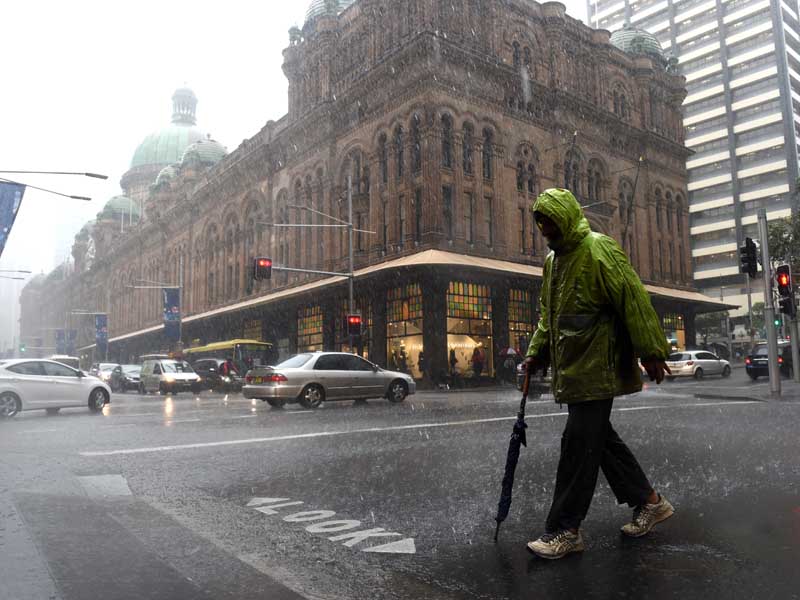 Drivers have been trapped in floodwaters that have risen above car roofs and families have evacuated inundated homes as wild weather batters Sydney and parts of coastal New South Wales.

A deepening low pressure system has caused heavy rain and strong winds, which have brought down trees and powerlines, cut power to 10,000 properties and caused major transport disruptions.

The State Emergency Service (SES) responded to hundreds of calls for help in the Sydney and Illawarra region after a severe weather warning was issued for the Metropolitan, Mid North Coast, Hunter and Illawarra districts.

The SES said the majority of call-outs were for leaking and damaged roofs and fallen trees, but Deputy Commissioner Steve Pearce said there had also been several flood rescues.

“We had a few cars in Parramatta – and this will give you an idea of the deluge of water – where water has been above the roofs of vehicles caught in some streets,” he said.

“We’ve had another flood rescue not that long ago up in the Lake Macquarie area where a young lady that was eight months pregnant was also trapped in rising floodwaters.

“We’ve had families requesting evacuation out of homes that are currently being inundated around the Hunter area as well.”

Wind gusts were so strong, one dislodged a large window pane in a building on Market Street in Sydney’s CBD about 4:00pm yesterday.

Fire and Rescue NSW’s Tom Cooper said part of the CBD was blocked off as crews worked to secure the 26th-storey window.

The busy street was closed between George Street and Clarence Street as crews worked to clean up the mess and bus services were delayed by up to half an hour.

“Fire crews have been kept busy all afternoon with this weather,” Mr Cooper said.

“There’s been numerous cases of trees down on powerlines, trees down across roadways, there’s also been a number of floodings and of course numerous motor vehicle accidents.”

The look on the face under this umbrella must be joyous… ☔️ #sydney #SydneyRain #SydneyWeather pic.twitter.com/5G817dLgh6 — Simon Wilde (@Wildeturkey) April 20, 2015

The SES said it received about 500 calls for help in the 24 hours from 5:00pm on Sunday, including for flood rescues in the Lake Macquarie and Sydney metropolitan areas.

Mr Pearce said the volume of calls increased in the evening, and some requests could not be immediately met as volunteers were kept busy in “arduous and horrible conditions”.

“I’ve just travelled through down here in the Illawarra with the gale-force winds and there’s trees down everywhere,” he told 702 ABC Sydney.

“It’s a really ferocious low pressure system this one, and I won’t be surprised at all that come daylight [Tuesday] we will be up around 1,500 calls for assistance right across the Sydney metropolitan and central coast areas.”

In Gosford, on the central coast, a man and woman were lucky to avoid serious injury after a tree fell on their car.

“The tree just came through the windscreen,” the woman, who had been driving, said.

“I don’t know where it came from – it just shot through the windscreen and crashed the car.”

I was feeling sorry for myself getting wet then I saw this policeman #SydneyWeather #sydney pic.twitter.com/ctSCgt3e6T @simongascoigne:

The Bureau of Meteorology (BoM) warned of damaging winds averaging 50 to 70 kilometres per hour with gusts of up to about 100kph along the coastal fringe of the Metropolitan, Hunter and Illawarra regions.

It said a developing low pressure system was producing gale-force south-easterly winds along the central part of the NSW coast.

“The low is likely to deepen and move towards the Hunter or southern Mid North Coast during Tuesday with gale-force winds continuing and seas rising further,” the BoM’s weather warning said.

“And wind-wise, we’re seeing a lot of wind with this system as well and that’s going to continue certainly along the coastal fringe of the Illawarra, Sydney and Hunter districts overnight,” he said.

“The main low that’s sort of generating this is actually going to become quite slow moving, so it will be sitting off probably the Hunter coast all day [Tuesday].

“That’s going to continue to drive in these really strong gusty southerly winds.”

Wind gusts of about 90kph were recorded at Kiama, Bellambi, Kurnell and Fort Dennison.

The SES advised people to move vehicles under cover or away from trees and keep clear of fallen power lines.

It also recommended that loose items around homes and yards be secured and put away.

The bureau also issued a flood watch for the coast from the Manning Valley, including Gloucester, to the Central Coast.