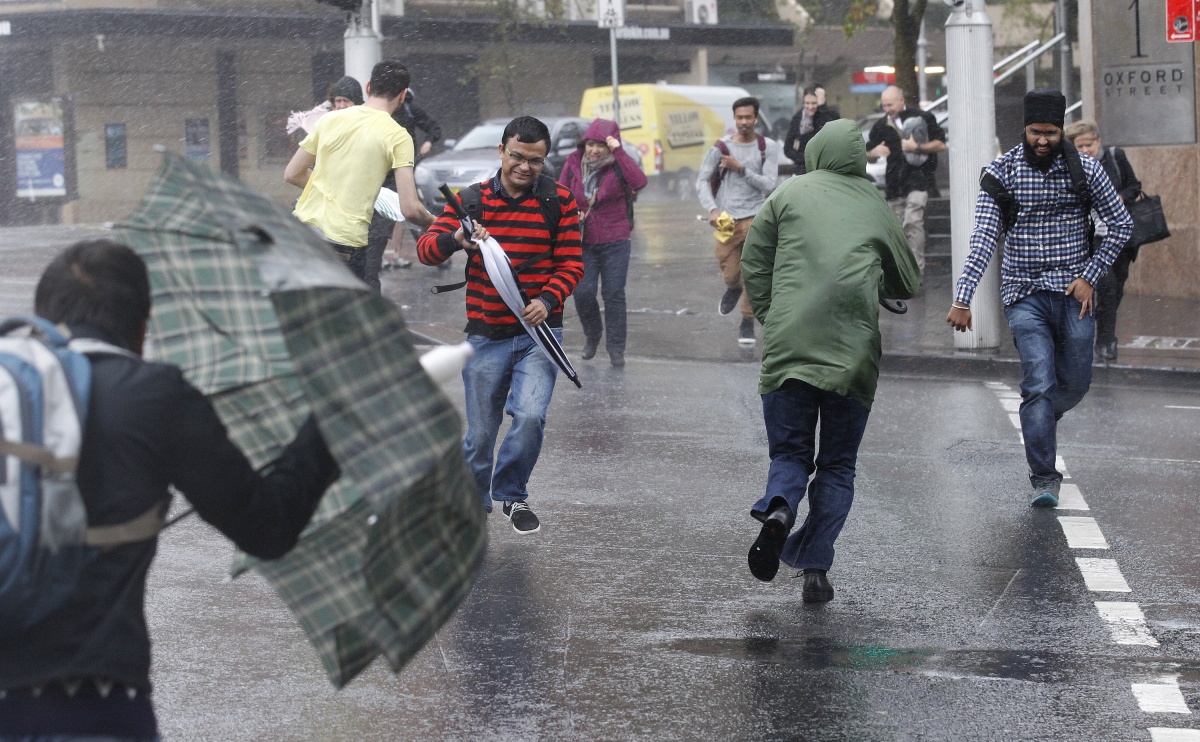 GALLERY: The damage done to NSW

Colin Webb, 79, Robin MacDonald, 68 and Brian Wilson, 72, were all believed to have been trapped in their residences after a flash flood swept through the town in the NSW Hunter region on Tuesday morning.

The men were believed to be living at a retirement village.

Emergency crews have been battling “cyclonic” conditions, as heavy rain and wind gusts of more than 130km/h have brought down trees and powerlines, cut power to 200,000 properties, and caused major transport disruptions.

Police on Tuesday confirmed three elderly people had died in the Hunter town of Dungog, north of Newcastle, where homes have been washed off their footings.

“In terms of the weather pattern, it’s still very dangerous,” he said.

Parts of NSW would be declared emergency disaster zones so those affected would be able to apply for assistance.

He pleaded with residents to avoid floodwater as another two people are believed missing in Maitland, outside of Newcastle.

Mr Elliott said 500 State Emergency Service (SES) volunteers were risking “life and limb” to ensure that the people of NSW got through the storm.

“Today’s events are going to test our emergency services,” he said.

However, there isn’t much relief in sight, with the Bureau of Meteorology confirming there was more wild weather to come.

A second storm cell is expected to make landfall on Wednesday morning, bringing with it further rainfall and gale-force winds.

Sydney’s Northern Beaches are still on alert about rising floodwater, while Manly residents have been warned about needing to evacuate if the Manly Dam overflows.

The SES on Tuesday afternoon sent an emergency alert to more than 100,000 people in the Newcastle area, warning of another developing storm cell.

In the Sydney suburbs of Manly and North Manly, they visited homes and sent text messages to warn homes could be flooded as the Manly Dam rose.

Further north, authorities warned some low-lying parts of nearby Narrabeen and North Narrabeen, near Narrabeen Lagoon, could also be at risk

But flooding, rain and cyclonic winds should begin to ease at dawn on Wednesday, the BoM said.

“Large swells and rains are expected into Thursday, at least in the southern half of the NSW coast,” the BoM said.

SES deputy commissioner Steve Pearce said the storm was like nothing he had seen before.

“I haven’t seen a storm of this magnitude in my time here at the SES and, indeed, this would be the largest storm operation in the last 10 years,” he said.

The SES has received more than 6500 requests for assistance, he said.

He said an enormous geographic area was being affected by the cyclonic conditions.

Meanwhile, an evacuation centre was set up at Dungog High School following reports at least 20 homes had been damaged by flooding, but it has since been closed.

However, evacuation centres have been opened at the Senior Citizens Centre in East Maitland and the Shamrock Multipurpose Centre at Ashton Field.

Hunter Police Commander Jeff Loy said several homes had been washed away in the town.

In the nearby town of Greta, fire crews used a dinghy to rescue a woman and two children trapped in their home as it was washed away.

“The house had actually broken away from its footings and was floating away,” Fire and Rescue NSW’s Tom Cooper said.

“Fire crews attempted a rescue in a dinghy. They managed to get up to the house where they rescued a woman and her two children, one 12 and one 13.

“They were suffering from a little bit of hypothermia. They ambulance crews were there to greet them when they got back to dry land.”

Meanwhile, a school bus had been washed off a road near Maitland, and several Hunter homes had been split in half by falling trees.

Gathering in one of the few places in town with power, conveniently with beer on tap, Maitland locals swapped tales about the worst flooding in decades.

In the city near Newcastle, most businesses closed their doors, cars have been abandoned in rising floodwaters and homes inundated with rain.

Local Paul Myers, 40, had water running down his walls from early Tuesday.

“I had water nearly a foot deep running down the side of the house,” Mr Myers said over a schooner at the Windsor Castle Hotel.

“There is nothing we could do to stop it.

“This weather hasn’t happened since the Pasha Bulker (bulk carrier was grounded on a Newcastle beach in 2007).”

Ron Cant took refuge at the pub after having water start creeping in the back of his house, which sits on one of the most elevated streets in Maitland.

“I have never seen this much rain in my whole life and I have lived in for 44 years,” he said.

Nick Gyger was one of the many locals utilising a pub’s power outlets to charge his phones.

“At 4am it started with a loud bang with a tree down out the front of my place,” he said.

“I have never seen it this bad in my 30 years. ”I can’t contact the SES either because they are constantly engaged.”

NSW Premier Mike Baird is asking people to be patient as emergency crews deal with life-threatening situations during the storms that are battering the state.

“People need to be patient while we focus very clearly on the critical services in health and aged care,” he said in press conference on Tuesday.

“It’s a tragedy and it’s hard to imagine that they were just going about their lives a short time ago,” Mr Baird told 1233 ABC Newcastle.

“Our thoughts and prayers are with their family and friends.”

The Premier warned residents, especially in the Hunter and Central Coast regions, not to enter floodwaters.

“Many flood rescues have been from people entering floodwaters they shouldn’t be entering, he said.

“There has been over 47 flood rescues. Over 200,000 homes and busidenesses that have lost their power.”

• Call NSW State Emergency Service for help with flooding or damage from storms on 132 500.

• For weather conditions visit the Bureau of Meteorology website.

Enough of the rain & #nswstorms. Lost part of my roof but still better off than others. pic.twitter.com/ht9hw3KYpc

#NSWSTORMS: A photo from the @HigginsStormCh Facebook page shows the #flood situation at #Dungog, north of Newcastle. pic.twitter.com/O7KCv6I4O9