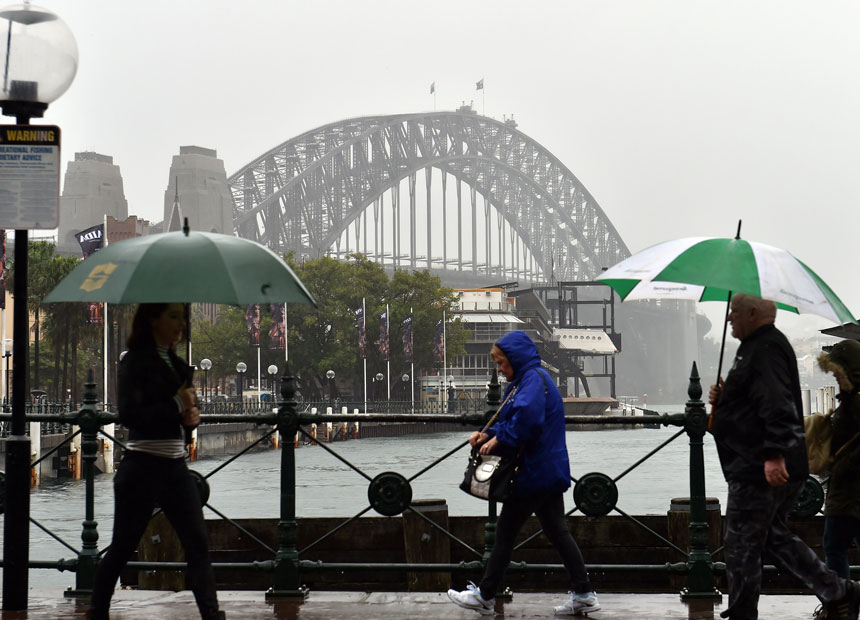 Three people have been killed in wild weather in NSW’s Central Hunter region, where homes have been washed off their footings in the town of Dungog, north of Newcastle.

Emergency crews have been battling “cyclonic” conditions, which have already brought heavy rain and wind gusts in excess of 135 kilometres per hour.

The State Emergency Service (SES) on Tuesday afternoon sent an emergency alert to more than 100,000 people in the Newcastle area, warning of another developing storm cell.

Premier Mike Baird said the weather was likely to worsen in the coming hours, and urged people in affected areas to consider leaving work early.

He told 702 ABC Sydney that NSW, particularly Newcastle, would be hit by “the toughest and worst weather” up until midnight.

EXTRAORDINARY VIDEO: House washed away by waters in Dungog. I’ve never seen anything like it. (Source: NBN News) pic.twitter.com/ljXsWriywk

“It’s a tragedy and it’s hard to imagine that they were just going about their lives a short time ago,” Mr Baird told 1233 ABC Newcastle.

“Our thoughts and prayers are with their family and friends.”

An evacuation centre was set up at Dungog High School following reports at least 20 homes had been damaged by flooding, but authorities encouraged residents to make other accommodation arrangements if they could.

Hunter police commander Jeff Loy said several homes had been washed away in the town.

Meanwhile, a school bus had been washed off a road near Maitland, and several Hunter homes had been split in half by falling trees.

Tens of thousands of people are without power and SES crews have answered more than 4,500 emergency calls as wild weather associated with a low off the east coast batters Sydney, the Hunter and the NSW Central Coast.

The Bureau of Meteorology (BoM) reported 119 millimetres of rainfall in the 24 hours until 9:00am at the Sydney Observatory Hill – the wettest 24-hour period since 2002.

The maximum temperature recorded across the day was 15.4 degrees Celsius, making it also the coldest April day since 1983, the BoM said.

The SES said “unprecedented” wind gusts of up to 135kph had lashed the Hunter, with dozens of houses losing their roofs, thousands of trees down, and more than 200,000 properties without power across the state – the largest outage since 2007.

Dozens of people have been rescued after being trapped in buildings, on roofs and in cars.

Mr Baird said rescuers had conducted 47 flood rescues, and 3,000 people had called triple-0 on top of the thousands of requests for help from the SES.

Several hospitals were being powered by back-up generators, and crews were working to restore power to health facilities and aged care homes as a priority.

“Those requiring support, in terms of ongoing life support, is obviously the focus,” he said.

He said people in affected areas should consider leaving work early, as the weather was likely to worsen in the coming hours.

“So there is strong advice to everyone across the greater metropolitan area, that is from Illawarra to Newcastle, to start to head home as soon as possible,” he said.

Flood advice for residents in Newcastle. Expect rapid rises and flash flooding in the next few hours. Do not enter floodwater. Telephone 000

“We are calling for bosses to be flexible, people to make arrangements in an orderly way to start to head home as soon as you possibly can.”

Forty-seven schools had been closed, mainly in the Hunter, and some would remain closed tomorrow, he said.

The BoM said another low pressure system wasforming off the Central Coast and was expected to move into the Hunter and coastal areas on Tuesday afternoon.

A severe weather warning is in place for locally destructive winds, heavy rainfall and damaging surf in the Sydney Metropolitan, Hunter and Illawarra districts.

“We’ve received just under 3,000 calls for assistance [in the Sydney, the Hunter district, Central Coast and Illawarra] within a 24-hour period, which is enormous.

“We’ve haven’t seen this sort of weather pattern, this east coast low, or one as severe as this, in years.

“The consistent gale force winds … are actually cyclonic in some areas with gusts up to 135 kilometres per hour.”

“We’ve got a lot of low lying houses in the township near rivers and unfortunately a lot of those houses have gone under,” she said. “It sort of happened in the middle of the night, so people, there wasn’t a lot of notice.

“We’ve lost about five houses, there’s at least 20 houses had running water rush through them.

“We’ve got a lot of people who have nowhere to call ‘home’ at the moment.”

In the nearby town of Greta, fire crews used a dinghy to rescue a woman and two children trapped in their home as it was washed away.

“The house had actually broken away from its footings and was floating away,” Fire and Rescue NSW’s Tom Cooper said.

“Fire crews attempted a rescue in a dinghy. They managed to get up to the house where they rescued a woman and her two children, one 12 and one 13.

“They were suffering from a little bit of hypothermia. They ambulance crews were there to greet them when they got back to dry land.”

SES crews had to carry out a number of swift-water rescues after floodwaters swept through the Stroud campground in the Hunter.

Councillor Karen Hutchinson described the area around the council-owned site as a disaster zone.

“The front fences are gone, the fence around the pool is gone,” she said.

“There are buildings destroyed; the grandstand has been blown out at one end. [There] is huge damage.”

Near Gosford, local MP Lucy Wicks said she had a lucky escape when a tree flattened her car after falling through her house at Springfield.

“Hearing the crack of the tree coming across the house at seven o’clock this morning probably not the sound I wanted to hear,” she said. “For us, the tree has gone through the lounge room, through a balcony and unfortunately onto our car.”

Power crews were battling to repair the damaged network but it is expected that some households’ electricity may not be restored until Wednesday.

Superintendent Wayne Phillips from NSW Fire and Rescue said coastal areas were bearing the brunt of the storm.

“The areas most affected are from Sydney to Newcastle. We’ve got numerous wires down, trees down,” he said.

The Hunter and Mid North Coast are expected to suffer through the worst of Tuesday’s wild weather, with about 200 millimetres of rain and gale force winds of up to 100 kilometres per hour forecast.

Meanwhile, there were reports of an 11-metre wave off Sydney.

A number of major roads and rail lines have been closed in Sydney and around the state as a result of the wild weather.

The Princes Highway is closed at Sydenham because of a fallen power pole, the Bells Line of Road is closed at Kurrajong and flooding has closed the Wakehurst Parkway and Oxford Falls Road near Sydney’s northern beaches.

Train services have been cancelled between Newcastle and Sydney as well as between the Central Coast and Newcastle.

Services on the South Coast train line have also been cancelled between Oak Flats and Kiama.

Transport NSW cancelled the Manly Fast Ferry service due to the weather conditions and heavy swell.

Courts were also closed in Newcastle, East Maitland, Singleton and Wyong due to the wild weather, NSW Justice said.

For more detailed information on the Bureau of Meteorology’s weather warnings, click here.

NSW storms: ‘This is going to be catastrophic’