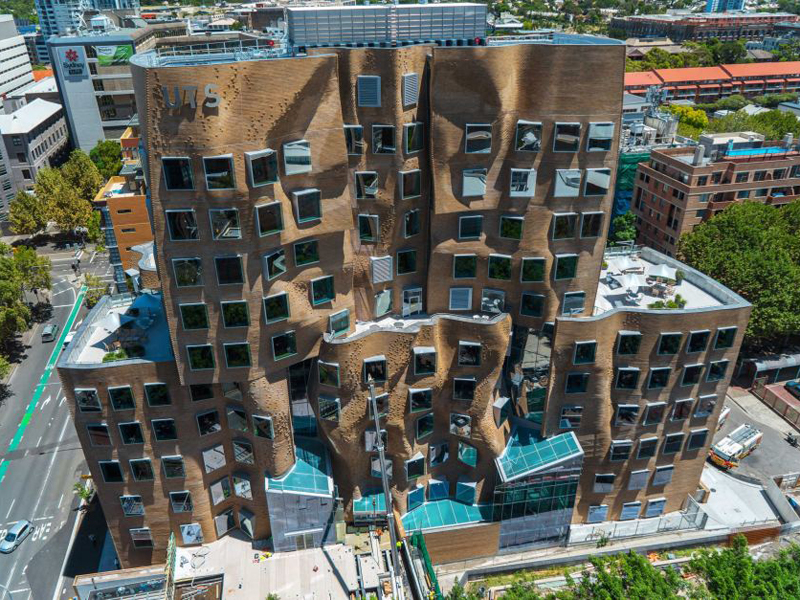 A Sydney university has allowed a world famous architect to construct what appears to be a $180 million bag of skin on its campus.

Frank Gehry has been given free reign to design a rippling, saggy, brownish structure to house the University of Technology Sydney’s business school, which is now complete and presumably ready to be pinched and caressed.

Mr Gehry has told the national broadcaster that he was inspired by the folds in skin and clothing, and admitted that he feels some apprehension at the final result.

“Oh boy. I’m Jewish and I feel guilty about everything,” he said to the ABC.

“It’ll take me two years to come around, I see all the things I would change and want to change, and [all the things] actually I wouldn’t change.”

The main feature inside the building is a crumpled mirrored staircase.

Quirky architecture is a far more common sight in Melbourne. For example, RMIT’s campus outside Melbourne Central station appears to be covered in green goop. Perhaps zany design is a learning aid.

Mr Gehry is renowned for many other quizzical structures, such as the Guggenheim Museum in Spain, which is best described as a knight’s suit of armour glued together to resemble a battleship.

As you would assume, he does not like ‘normal’ buildings.

“They’re faceless, not friendly and cold,” he said.

His newest addition to Sydney’s landscape certainly has a face, possibly an armpit as well, and looks like it could give you a nice, warm hug if you let it.