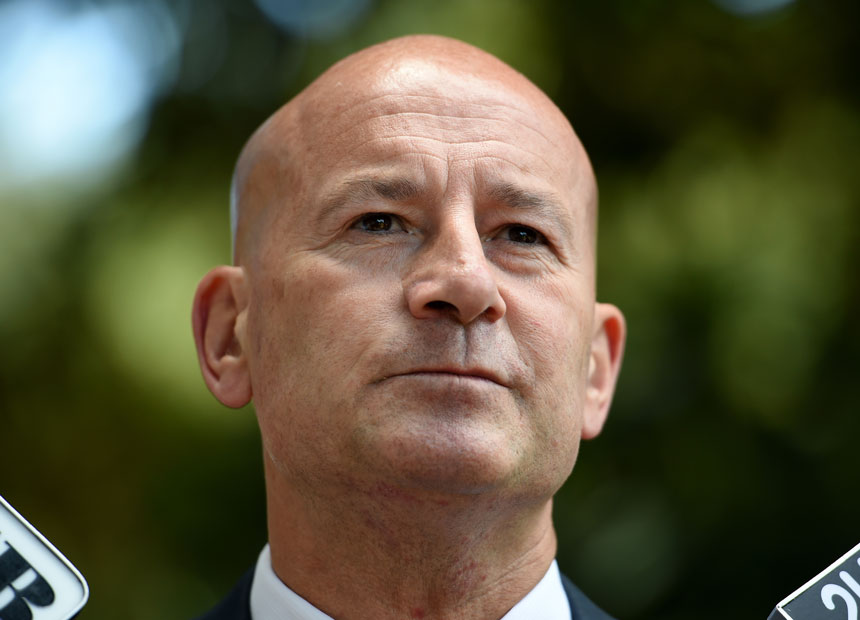 Mr Robertson had been facing growing internal pressure to resign after it was revealed he sent a letter to a government department on behalf of Monis in 2011.

Monis was killed after he held 17 people hostages in the Lindt Chocolate cafe in central Sydney for more than 16 hours last week.

It emerged on Monday that Mr Robertson had sent a letter asking for Monis to have a supervised visit with his children while an apprehended violence order (AVO) and family court proceedings were against him.

“The next election is so important that Labor must be united behind the leader,” he said.

“And so as a lifelong Labor man I have chosen to step aside as Labor leader to give Labor this opportunity.

“I have proudly represented working people as a union organiser and head of the trade union movement.

“I was never motivated by politics or seeking high office.

“I just wanted to serve the community and make a difference to peoples lives.”

Earlier today Labor MPs were said to be gathering support for a leadership change if Mr Robertson did not step down.

The Labor caucus will meet on January 5 to elect a new Opposition Leader.

Labor’s Treasury spokesman Michael Daley has confirmed he will be a candidate.

Environment spokesman Luke Foley, a member of the Upper House, is also favoured by some MPs, but would need to secure a seat in the Legislative Assembly.

The new acting leader, Linda Burney, said it was too early to say whether or not she would put herself forward for the position.

“I’m not going to speculate at this point what I’ll do,” she said.

“Obviously what I need to concentrate on now is reassuring staff and going forward with the plans that we have in place for the 2015 election.

“It is three months out from the election, but it’s not like Labor has been sitting twiddling its thumbs waiting for that election. We have worked very hard, and we want it to be a contest of ideas.

“This election is important. It’s important for the people of NSW in terms of the way in which [Premier] Mike Baird will sell and lease anything that’s not tied down.”

Speaking to media outside Sydney’s Trades Hall, Mr Robertson said he was proud to have led reform initiatives to rid Labor of corruption.

However, he acknowledged that he had lost confidence of key party members.

Mr Robertson said he recognised that the most recent controversy over Monis had upset many, but said being a local member carried a responsibility to represent all constituents.

Many of Mr Robertson’s staff watched the media conference, some in tears, as he thanked them for their hard work.

“It is with enormous sadness that I take on the role of acting leader of the NSW Labor Party as a result of the resignation of John Robertson,” she said.

“John has been a committed and hardworking leader who took on one of the toughest jobs in Australian politics at the lowest ebb for NSW Labor.

“His reform of the Labor Party, his passion for the people of NSW and his commitment to true public service will not ever be forgotten by myself or Labor.”