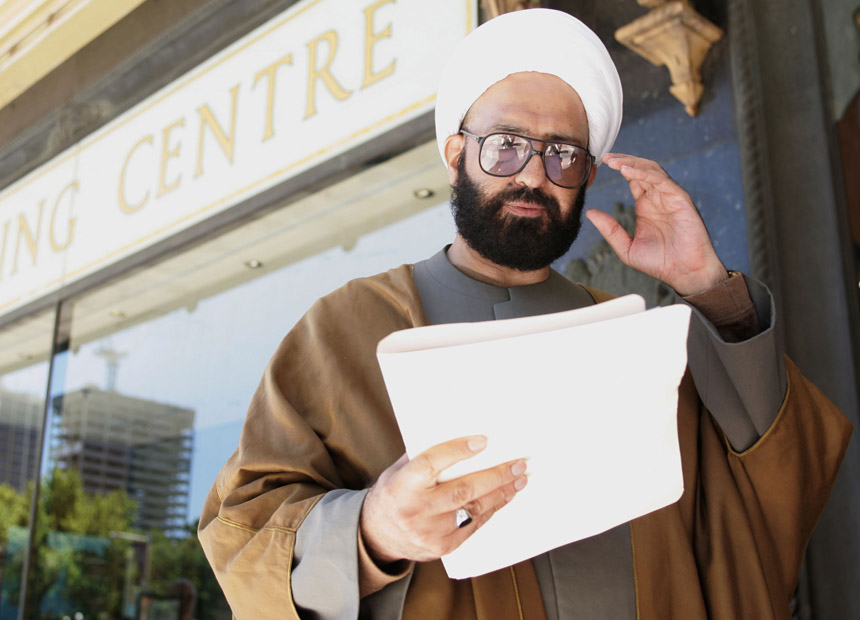 At a glance – what we know

⇒ Man Haron Monis, 50, was an Iranian cleric living in Bexley North in Sydney’s south
⇒ He was charged as an accessory in the 2013 stabbing murder of his ex-wife, Noleen Hayson Pal
⇒ Mr Monis was facing more than 40 sexual and indecent assault charges
⇒ He was charged for sending offensive letters to families of dead Australian soldiers
⇒ Mr Monis was granted political asylum in Australia after fleeing Iran

Mr Monis, 50, had been granted political asylum in Australia, and was on bail for a string of violent offences, including being an accessory to the 2013 murder of his ex-wife.

He was also facing more than 40 sexual and indecent assault charges and had been convicted for sending offensive mail to the families of deceased Australian soldiers, according to an ABC report.

Mr Monis first came to the attention of the courts for writing offensive letters to the families of seven Australian soldiers killed in Afghanistan between 2007 and 2009.

He was convicted of 12 counts of using a postal service to cause offence, ordered to perform 300 hours of community service and placed on a two-year good behaviour bond.

At his early morning press conference NSW Premier Mike Baird was asked whether he was concerned the Bail Act had allowed Monis to be free despite the many charges against him.

“I am concerned that there was a vicious, horrendous attack in the heart of our city,” the premier said.

Police were negotiating with Mr Monis prior to officers storming the building in the early hours of Tuesday morning.

He entered the cafe at 9:45am on Monday and held a total of 17 staff and customers hostage for 16-hours.

Mr Monis’s former lawyer, Manny Conditsis, said he was a “loner” and isolated figure who was probably acting alone.

“He had an incredible passion to fight governments and rally against them,” Mr Conditsis said.

“He always said to me that he loved Australia and the Australian people but he hated the government for what they were doing [overseas]”.

“His ideology is just so strong and so powerful that it clouds his vision for common sense and objectiveness”.

Mr Monis told ABC News in 2001 that he fled Iran five years earlier after falling foul of the Iranian regime, which he said had placed his wife and children under house arrest.

Mr Conditsis represented Mr Monis last year when he was charged with being accessory to the murder of ex-wife Noleen Hayson Pal, who was stabbed and set alight outside a western Sydney unit.

“Knowing he was on bail for very serious offences, knowing that while he was in custody some terrible things happened to him, I thought he may consider that he’s got nothing to lose,” he said.

“Hence participating in something as desperate and outrageous as this.”

• Sixteen hours of hell: what we know about the hostages
• Martin Place: second in a new wave of terror?

“He was put through let’s say some very unpleasant events, involving matters of excrement over himself and his cell,” he said.

“This is a one-off random individual.

“It’s not a concerted terrorism event or act.

On his website which has since been suspended, Mr Monis said Muslims were fighting against the terrorism of the USA and its British and Australian allies.

“Islam wants peace on the Earth, that’s why Muslims want to stop terrorism of America and its allies,” the website reads.

“If we stay silent towards the criminals we cannot have a peaceful society. The more you fight with crime, the more peaceful you are.”

AFP asked to investigate in 2008

The leader of Australia’s Shia Muslim community previously called for Australian Federal Police to investigate Mr Monis, according to a report by The Australian from 2008.

Sheik Mousselmani, head of the Supreme Islamic Shia Council of Australia, said Mr Monis was “not one of us” after he claimed to be an Islamic cleric.

“The federal police should investigate who he is. It should be their responsibility,” Sheik Mousselmani said in 2008.

“We don’t follow, we don’t support and we don’t stand with anyone we don’t know”.

Man Haron Monis: who was the siege gunman?