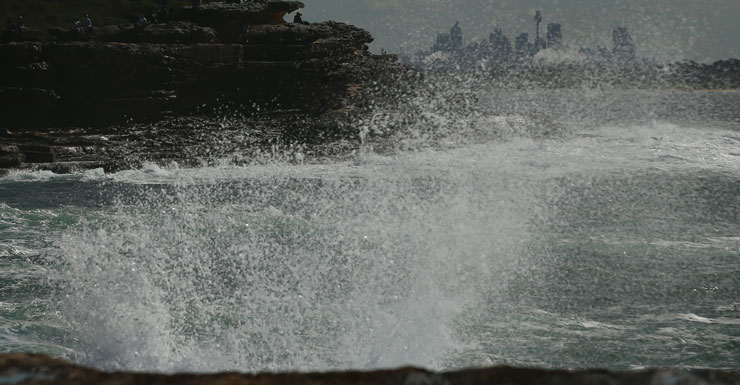 A series of boating accidents has left two people dead after a day of rough seas on the NSW coast.

A further 11 people were rescued in five separate incidents on Sunday.

In Botany Bay, two men died and a third man was injured after a fishing boat hit rocks and capsized in rough seas about 1.10pm.

Four helicopters were sent to rescue two men who were floating face down in the water and a third who reached a nearby rock shelf.

All three were recovered but the two men died at the scene.

None of them were wearing life jackets.

Later on Sunday, a racing catamaran overturned at Botany Heads, throwing a number of people into the water.

The Westpac Life Saver Helicopter stopped a shipping container from ploughing into the vessel until the people were rescued by police.

#KURNELL – Two people are deceased and one man rescued after their boat capsized in Botany Bay. More to come. pic.twitter.com/XEFPJANRHk

In between the two accidents, rescue crews helped three capsized jet skiers at Merries Reef in Sydney’s south and several people in the water off Kirribilli after their boat overturned.

Helicopter crews also searched for a man who went missing in the surf at Whale Beach – he was found on the beach safe and well.

“We need to be aware of what nature can throw at us,” he said.

“Many tragic accidents can be avoided if people took the time to check weather and ocean forecasts.

“Nothing is more tragic than losing lives so close to Christmas.”

Mr Leahy also praised the emergency service crew for keeping up with the number of incidents on Sunday.

Two dead after boat swamped by wave in Botany Bay