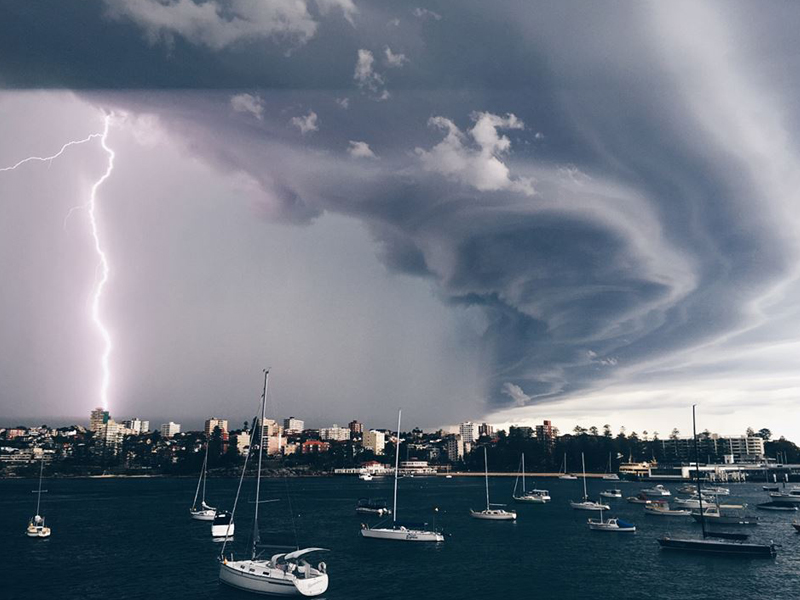 Sydney has been battered by more wild storms overnight, with the State Emergency Service responding to calls from people trapped by fallen buildings and floodwater.

According to the ABC, more than 10,000 home were left without power on Sunday night after a severe thunderstorm battered New South Wales with 100 kilometre winds, torrential rain and damaging hailstones.

Severe weather blacked out traffic lights and brought down power lines, with the areas of Camden, Ku-ring-gai, the Hawkesbury and Warringah the worst hit.

At 5pm, SES volunteers rescued a person trapped in their car in a four-car pile-up in Vineyard, while a Bligh Park man had to be rescued after becoming trapped under an awning brought down by a collapsed tree.

Some areas received 30 millimetres of rain in just 30 minutes.

On the New South Wales south coast, a farmer in Bega was airlifted by helicopter after becoming trapped in rising floodwater while herding cattle.

South coast residents who live in low-lying areas have been warned by the SES to evacuate the area.

UPDATE: A man has been freed after a tree fell on to a pergola at Bligh Park. More in #9NewsAt6 pic.twitter.com/M67KjsBxNW

Several events on Sunday were cancelled including short film festival Tropfest, the V8 Supercars Sydney 500 race, and a Christmas concert in Surry Hills.

Flash flooding and large hailstones have caused an estimated $1 billion worth of damage in Brisbane, according to a News Corp report.

SES spokesman Phil Campbell told ABC the worst of the weather was over, but warned NSW residents more thunderstorms were expected until Wednesday.