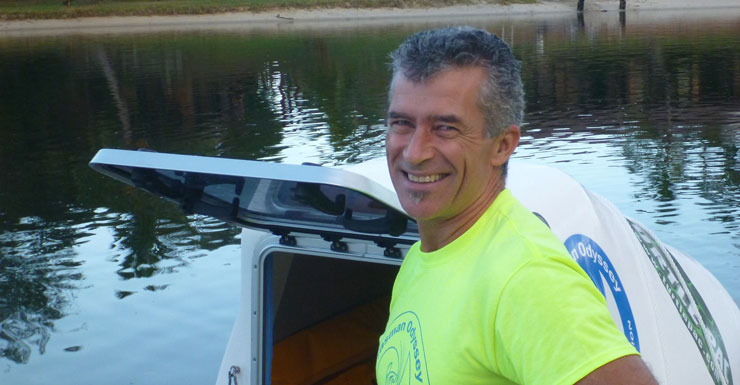 Solo kayaker Stuart Cleary has been rescued off the New South Wales mid-north coast less than a day after he set off to cross the Tasman Sea.

Mr Cleary, 53, departed from his home town of Ballina, in northern New South Wales, on Sunday night and was attempting to be the first person to paddle solo and unassisted to New Zealand.

The former oil rig driver contacted his wife on Monday morning to say he was aborting the mission and would attempt to paddle towards land.

• Taxi driver jailed for groping
• Diverted A380 flies to Sydney

It was understood the adventurer’s homemade kayak had developed steering problems.

A spokeswoman from the Australian Maritime Safety Authority said a distress beacon was activated on Monday afternoon.

A helicopter and water police headed towards the signal, about 40 nautical miles north east of Coffs Harbour, and Mr Cleary was rescued by NSW water police about 4:15pm (AEDT).

He is being taken back to Coffs Harbour and is in a good condition.

Mr Cleary originally expected the trip to take about 60 days.

“I got interested in it a few years ago when I saw Andrew McAuley’s story,” Mr Cleary told ABC News before he set out.

McAuley was a 38-year-old adventurer who attempted the crossing in a modified sea kayak in 2007.

He disappeared within sight of New Zealand.

Including Mr Cleary, seven people have now made 13 attempts to cross the Tasman Sea.

Earlier this year, a New Zealand man had to be winched to safety just kilometres from finishing his attempt to become the first solo kayaker to cross the Tasman.

It was not clear whether Mr Cleary would continue with the attempt at a later date.