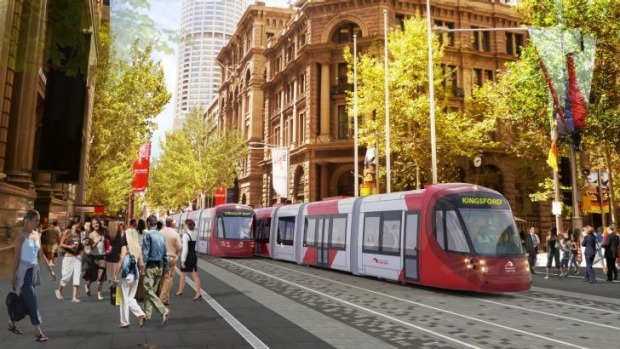 Sydney’s new 67-metre trams will be the longest in the world, with the capacity to carry up to 466 people.

Transport Minister Gladys Berejiklian this week confirmed the light rail trams will run from George Street in Sydney’s CBD to Randwick and Kingsford in the eastern suburbs.

The project will be built over the next five years and is expected to cost $2.2 billion, according to a Fairfax report.

The massive trams will be made out of two French-made Alstom trams coupled together, and will carry an estimated 13,500 people an hour in each direction.

The trams are 15 times the length of a Toyota Corolla, double the length of Melbourne’s longest tram, and a few metres short of a Boeing 747.

Ms Berejiklian said the trams will run every four minutes on George Street.

A group attempting to stop the construction of the tram line told Fairfax they were concerned about pedestrian safety as well as the amount of time it would take the trams to cross busy CBD intersections.

Sydney to get 67m-long trams