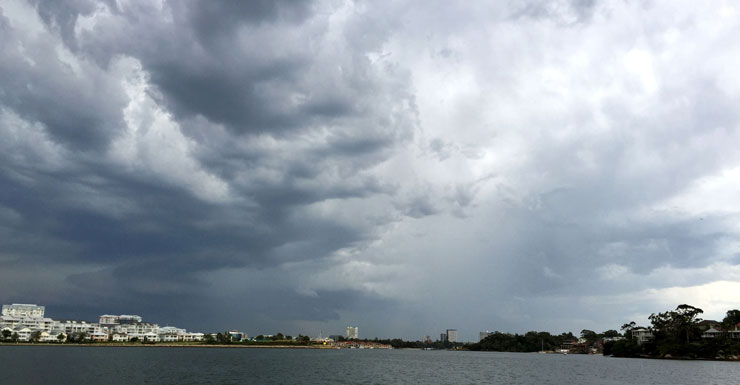 Two people have been struck by lightning as severe thunderstorms swept through Sydney causing flight and traffic delays.

A man in his 20s was hit by lightning in Hazelbrook, in the Blue Mountains, and another person was struck in Cabramatta in Sydney’s southwest, an ambulance spokeswoman said.

Both relatively minor cases came after the Bureau of Meteorology issued a severe thunderstorm warning on Wednesday afternoon for areas near Parramatta, Sydney Olympic Park and Richmond.

• Hottest ever spring in Australia breaks another record

The bureau warned the storm was moving towards the northeast and was forecast to hit Hornsby, Sydney city, the Harbour Bridge and the northern beaches.

By 7pm, the worst of the storm seemed to have passed, but thousands of homes in the Blue Mountains, Hawkesbury, Southern Highlands and western Sydney regions were still without power.

Around three quarters of the state’s fire and rescue crews are responding to more than 80 storm-related incidents across the Sydney metro area, including trees and powerlines being down and flooding.

It took 20 firefighters around two hours to put out a fire at an electrical substation in the inner city suburb of Pyrmont.

Authorities aren’t sure what caused the fire, but think it may have been due to lightning.

The fire proved tricky for firefighters who were prevented from using water to extinguish the substation blaze as it had about 11,000 volts of electricity running through it, Superintendent Ian Krimmer said.

Instead, they worked to protect surrounding buildings, which included a five-level residential block, until the energy provider isolated power to the site.

About 25 residential units were evacuated as a precaution and there were no reports of injury.

The storms also caused delays to flights out of Sydney Airport with Qantas and Virgin saying domestic and international runways were closed for about two hours from 5.15pm.

Qantas said about 10 flights had been affected, some by up to two hours.

Meanwhile, trains are experienced delays between Richmond and Clarendon due to lightning strikes at Clarendon.

Buses operated a replacement service between the stations, however heavy traffic in the Richmond area caused delays for the buses.

There was also heavy traffic delays in Strathfield due to flooding.

Heavy rain has also caused flooding in the Southern Highlands with the State Emergency Service (SES) receiving a flurry of calls for help.

The medical centre at Mittagong flooded after the downpour.

Bowral and Picton received nearly 30 millimetres of rain in 20 minutes as the storm headed towards Kangaroo Valley.

Nearly 2,000 homes are without power in the Illawarra as a result of the storms.

About 1,200 homes are without power at Koonawarra and Dapto, while more than 400 homes are affected at Horsley, and 200 homes at Kanahooka.

In the Southern Highlands, Endeavour Energy crews are working to restore power to more than 800 homes in Bowral.

“Residents will need to be careful when they’re driving home from work with regards to flash flooding that may occur in this area as well as any trees that may come down, and they may bring powerlines with them,” he said.

Storms cause chaos in Sydney