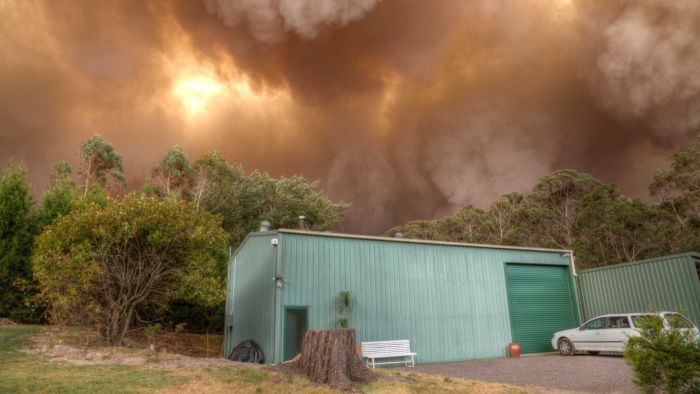 Residents were on high alert when the wind changed direction suddenly as the Lithgow fire headed towards Bilpin.

Rain and wind around the Lithgow area overnight has hampered firefighting efforts on the State Mine blaze, ahead of hot and windy conditions today.

Yesterday the Rural Fire Service (RFS) announced it had strategically backburned the fire and the blaze at Mount Victoria together in a bid to try and prevent it from spreading further across the Blue Mountains.

He says rain fell in the area, but it wasn’t enough to put the massive 43,000 hectare fire out.

“We had around about 10mm and it has made a few of the tracks a bit slippery, so that’s restricted some access for us, for a period of time,” he said.

“But the guys have been kept busy out there all night ad we got a bit of wind around 2 o’clock as well, which hampered some of their activity for a little while.”

“We’re looking at some winds around 20-30 kilometres an hour and we’ve got some reasonably high temperatures,” Inspector Johnson said.

“With those sorts of weather conditions we’ll just have to be vigilant on what sort of fire behaviour we’ll see through the day.

“But we’re confident we’ve got some strategies in place and we’ve done a lot of good consolidation work overnight and we’ll be hoping for the best throughout the day.”

The Rural Fire Service says if flare-ups occur on the State Mine fire today, they are more likely to push the fire further east.

Inspector Johnson says although the fire has been burning towards Sydney, he cannot rule out flare-ups on the blaze’s western fringe.

“We’d like to think that won’t happen and I don’t think the conditions may not be as bad as originally forecast, because we’ve had that bit of a shower overnight,” he said.

“But having said that, we’ll be vigilant all day and we’ll have a lot of crews out there on standby to proceed to any outbreaks that might occur.”

Lithgow police say they are disappointed to see looting taking place at evacuated areas on the fire ground.

A vehicle was taken from one home but found a short distance away, while sheds and out buildings have also been a popular target.

Inspector Colin Cracknell says four houses have been hit by the opportunistic thieves.

“At the time we had as much security in place as we possibly could, but the times that these took place in very high, active, fire times and we couldn’t physically put out police on the ground when these places were being attacked,” he said.

“So it was a bit disappointing.”

Inspector Cracknell says police have also seen other people they suspect were trying to loot.

“As recently as Sunday evening we actually engaged some people who we identified as persons that should not have been in the area,” he said.

“There was a pursuit over a period of distance towards the Kurrajong area.

“Although the driver escaped, we have identified who he is and he will be dealt with under the Skye’s Law legislation in relation to the pursuit.”

An evacuation centre in Lithgow says it is not expecting to get many people today, despite the bad fire condition forecast.

The Lithgow Workmen’s Club has had between 100 and 200 people come in since it opened last week.

But its General Manager, Michael Alexander, says things are slowing down.

“Where Lithgow is having some great success is the backburns were fantastic to my knowledge and the fire front has obviously moved further east,” he said.

“So I’m not expecting it to be a bad day, but I’m expecting the state fire to be bad.

“Our area should be ok I believe.”

Mr Alexander says plenty of people have brought their pets to the evacuation centre over the last week.

“We’ve had turtles, we’ve had rabbits, we’ve had cats and dogs and all sorts of different animals here, which certainly the RSPCA have looked after.

“They stayed on site for a lot of time as well, so we’ve looked after them and the people.”

Mr Alexander says the club is turning its focus to helping firefighters.

“So going forward its our expectation we’ll still be providing lost of food and fodder for our firies to continue to fight the cause more to the east,” he said.

“And there’ll still be a lot of work to be undertaken, but I think the evacuation centre will be slower than it has been.”