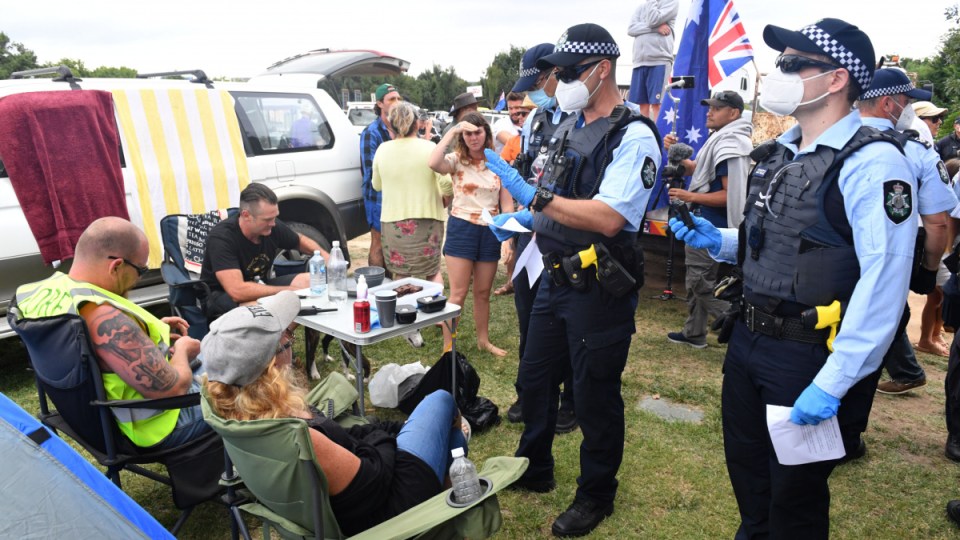 The first order for the campers to move on was given on Wednesday. Photo: AAP

Police have found a loaded, modified gun in the vehicle of a man who was among protesters in Canberra ordered to move on on Friday.

About 250 vehicles have been parked around the National Library this week, with police telling the anti-vaccine mandate protesters on Wednesday they were camping illegally.

Audio warnings were then given on Thursday before the move-on order was issued.

Most cars were leaving the area voluntarily soon after. Four were towed after their owners refused to move them.

ACT police said later they had seized some camping and other equipment.

The loaded and modified rifle was allegedly found in a vehicle belonging to a 44-year-old man. He was arrested and is expected to be charged with possessing an illegal firearm.

Police said the man would also face multiple traffic offences in relation to the roadworthiness of his vehicle.

ACT chief police officer Neil Gaughan said on Friday morning people were allowed to remain in the area and protest all they liked, but could not camp illegally.

“This is disruptive to Canberrans. That site was going to be used for events over the weekend and an event tonight,” he told the ABC.

“The National Capital Authority has had to cancel that because of the fact that these people are illegally camping, so we are moving them on.”

The anti-vaccination mandate campaign, known as the Convoy to Canberra, has included a march on Parliament House on Monday and a rally outside the National Press Club on Tuesday where Prime Minister Scott Morrison was speaking.

Police used capsicum spray and made three arrests on Wednesday at the camp.

An ACT policing spokesman said one woman assaulted an officer and was arrested and charged.

Two men also tried to interfere with the woman’s arrest and were also arrested.

Both men were charged with obstructing police.