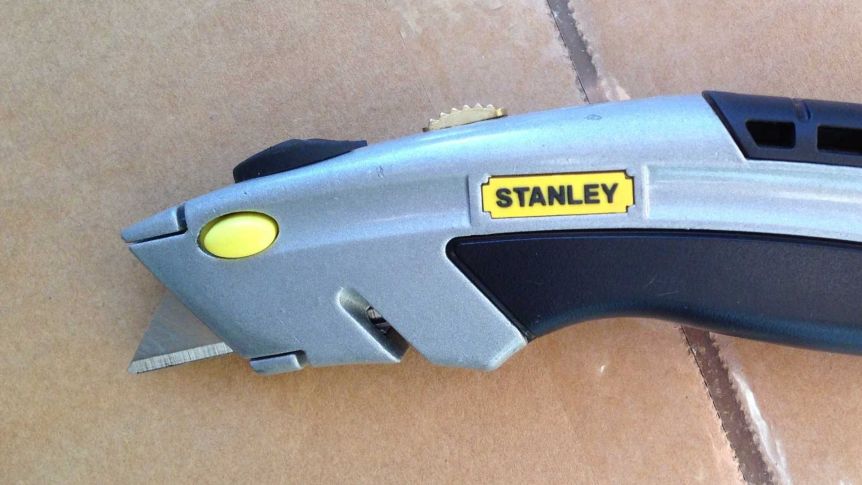 Stephen used a utility knife to cut out the cyst. Photo: Wikimedia Commons

An electrician says he grew so sick of waiting for elective surgery at Canberra Hospital that he took matters into his own hands, using a utility knife to excise a painful grape-sized cyst that was affecting his work.

The desperate and potentially dangerous decision to perform DIY surgery — which has been strongly warned against by the Australian Medical Association (AMA) — was taken after the Canberra man waited twice the required timeframe for elective surgery in the ACT.

Stephen said the swelling on his wrist was referred for elective surgery at Canberra Hospital by his GP.

“I booked in as a public patient. That was two years ago,” he said.

“The cyst was getting a bit more painful. I’m an electrician so I’m using my hands all the time. The lump became sore and I got sick of waiting.”

ACT Health policy requires that non-urgent cases be treated within a timeline of 365 days.

After waiting two years, Stephen became more and more frustrated that the grape-sized growth was affecting his work.

Even as the sole breadwinner for his family, he could not get a clear date for surgery from the hospital.

“I grabbed a Stanley knife and heated up the blade and put a cut into my wrist.

“I squeezed and popped out the cyst.

“I disinfected it and put some antiseptic, put a bandaid over it and that was it.”

‘Please, please do not do this at home’

Three months on from the decision, Stephen said the wound had completely healed.

But AMA ACT president Anthony Di Dio said he had been extremely lucky.

“I feel very much for Stephen and he is absolutely correct in that there are lots of people waiting for non-urgent surgical procedures in Canberra,” Dr Di Dio said.

“I’ve been waiting a couple of years for a sparky to do a job on my house and let me tell you: I’m not going to do anything on my own. If I touch anything, it’ll probably kill me.

“The number of arteries and veins anywhere near where he was touching with the Stanley knife … if you touch the wrong one it’ll kill you.

“Please, please do not do this at home.”

An AMA report card released in October found the ACT’s elective surgery wait times were worse than the national average, while its emergency department wait times were the worst in the country.

Stephen said he had considered going back to his doctor, before deciding to take on the cyst himself.

“If it was any bigger or in a different area I’d probably go back to the GP and see if I can get another referral to push it along a bit,” he said.

“I think it’s pretty ordinary that we have to wait over two years to get something cut out on your hand.

it was affecting my work and I’m the only one in the family that earns an income, my wife went through breast cancer so she’s at home.

“I just needed to get it done.”

Dr Di Dio recommended people in Stephen’s situation went back to their GP.

“If you get sick and tired of waiting, do not take action into your own hands. Stephen has been extremely lucky,” he said.

“If you’re sick of waiting, go to your GP and get your GP to agitate on your behalf.