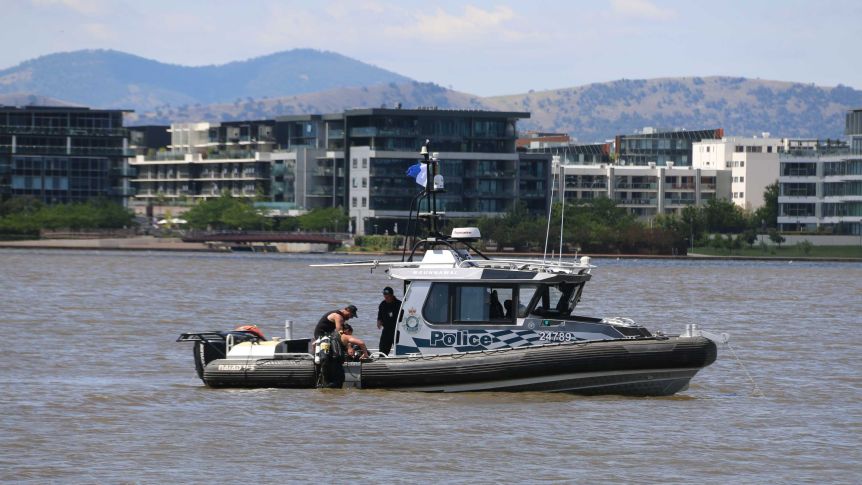 Police divers searched the water for hours after the man jumped into the lake. Photo: ABC News/Isaac Nowroozi

Police have arrested a man days after he allegedly jumped into Lake Burley Griffin to evade them, sparking a heavy search of the area in central Canberra.

The 29-year-old man allegedly made the bid for escape after police tailed him and another woman over a suspected stolen car.

But officers did not give chase when he jumped into the lake near Kings Avenue Bridge shortly after 1:15am on Monday.

He was last seen in the water about 100 metres from the shore.

His disappearance in the water sparked a large police search over the eastern part of the lake, with residents of the nearby Kingston Foreshore woken by a rescue helicopter before dawn.

For days, police were unable to locate the man, and it was unclear whether he had escaped or drowned.

But on New Year’s Eve, police executed a search warrant in Kambah, which led to the arrest of a 29-year-old man.

Police said their investigation had included the use of DNA evidence to identify the man and track him down.

Before he allegedly fled into the water, police said the man had been linked to a stolen car and followed through Canberra suburbs to the lake’s edge.

The man will face the ACT Magistrates Court later today charged with driving a car at police, failing to stop, theft, obtaining property by deception and driving while disqualified.

The woman he was allegedly with was arrested at the time and faced court on Monday morning, along with two other women police said were linked to the incident.

That trio were charged with a range of vehicle and weapons offences.