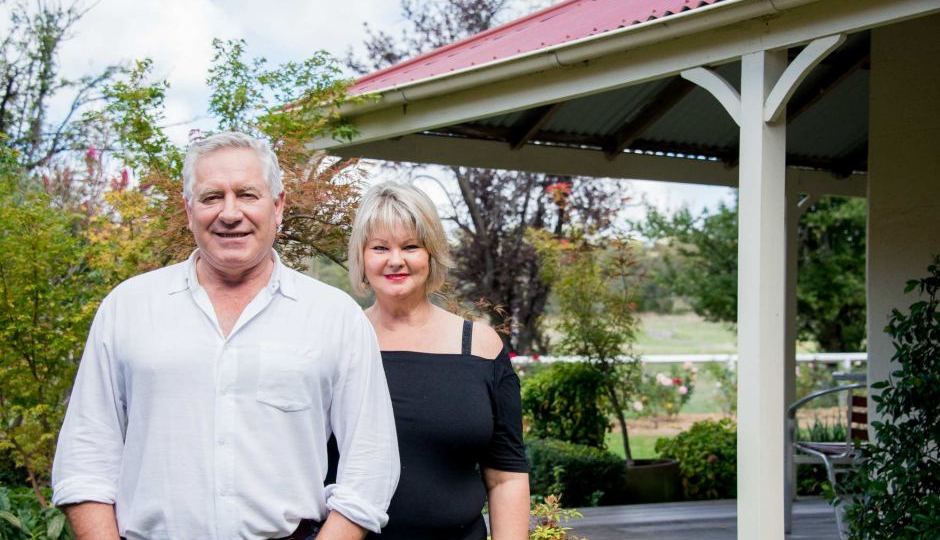 Nestled in the middle of Canberra’s southern suburbs lies Tuggeranong Homestead, a 31-hectare working property with a layered history stretching back many, many years.

It has been the site of Aboriginal corroborees, convict labour, colonial farming and even housed war historian Charles Bean, yet it was nearly lost to suburban development in the 1990s.

“The homestead really covers the last 200 years of our local history,” Rebecca Lamb, member of the Minders of Tuggeranong Homestead (MOTHS), said.

One of the earliest written records of local Aboriginal life was recorded at the site, when William Riley witnessed a corroboree in the 1820s.

Scar trees and axe grinding grooves are among artefacts that have been found across the property.

The Macquoids and convict labour

The homestead itself grew from an 1827 land grant that was later purchased in 1835 by Thomas Macquoid, the sheriff of the NSW Supreme Court, and named Waniassa estate.

Macquoid had a stone house and barn built on the property using convict labour.

In the late 1830s Macquoid suffered heavy financial losses during the pastoral crash and he suicided in 1841.

His son, Thomas Hyacinth Macquoid, was allowed to stay and manage the estate until his father’s debts were paid.

But misfortune struck the family again in 1857, when Macquoid drowned as the Dunbar sank off Sydney’s South Head.

The Cunninghams and the new homestead

Andrew Cunningham from Lanyon purchased the property in 1858, and it became known as Tuggranong (spelt without the E to distinguish it from the Parish of Tuggeranong).

In 1887, Cunningham’s son James took over managing Tuggeranong where he and his wife Mary raised eight children.

They built a new homestead of pisé (rammed earth) in 1908, incorporating part of the original Macquoid stone cottage.

Tuggeranong was a prosperous sheep farm and the homestead was the social hub of the district until the Cunninghams moved to Lanyon in 1914.

In 1916 the Commonwealth resumed Tuggeranong Homestead for military purposes, and in 1919 war correspondent and historian Charles Bean and his staff moved in to work on the official history of World War I.

The team spent the next five-and-a-half years writing the first volumes and enjoying social tennis and cricket in their downtime.

They even built a concrete cricket pitch in 1921 which is now the oldest in Canberra.

It was during a game of tennis that Bean met his wife Ethel Young, a nurse from nearby Queanbeyan.

When Bean and his staff moved to Sydney’s Victoria Barracks to complete their work in 1925, the homestead was leased to grazier and horse breeder Timothy McCormack.

The McCormacks and the brick façade

McCormack introduced mechanised farming, and for the next 50 years three generations of the family ran a successful enterprise producing world-class fine merino wool.

McCormack also built a racetrack on the property and started the Tuggeranong Racing Club.

In 1949 the homestead was redesigned and given a makeover.

“The main mud building had crumbled rather badly in the 1940s,” Ms Lamb said.

“The McCormacks obtained permission to demolish the parts that were in bad repair and to put a brick façade on the front.

“They also demolished some of the outer buildings that were in quite a bad state.”

It is this brick façade that greets visitors today.

Suburban development and fight to save the homestead

In 1976, the property was resumed again by the Commonwealth for suburban development, which saw its size reduced from 600 to 31 hectares and the creek flowing through it converted into a concrete drain.

“That really drew away the lifeblood of the property,” Ms Lamb said.

“It’s a heavy clay area which means the water flowed through but it also seeped through to the heavy areas where the buildings are.

“Since the water was taken away from the flowing creek, the rammed-earth walls of the building have actually cracked and dried out terribly and the [century-old] trees have also suffered due to lack of water.”

During the 1980s and ’90s, the homestead was occupied by a number of transient tenants and was under-maintained, vandalised and suffered extensive fire damage.

In the early ’80s the homestead was classified by the National Trust, but that did not stop the ACT government approving plans to build 350 houses on the property in 1992.

A community campaign, led by the MOTHS group, saw the plans overturned and the property’s cultural heritage officially recognised.

The homestead’s buildings and gardens were eventually restored in the early 2000s.

Today the homestead is run by caretakers Gerry Nussio and Ann Filmer and is a popular venue for weddings and corporate functions as well as school trips.

The main machinery shed has been converted into a function room.

“It’s favourable with couples because of its rustic qualities,” Mr Nussio said.

“We’re laid back with how people design or lay out their tables and decorations, but we do emphasise heritage so we don’t allow people to use Blu-tack or staple guns or stuff like that.”

For the past three-and-a-half years the couple have transformed the property’s gardens and welcomed many school groups through.

“They come to learn what happened in the olden days,” Ms Filmer said.

“They see the long-drop toilet, learn about where they milked the cows and also see Aboriginal artefacts [that have been found on the property].

“It’s keeping this place alive, the many layers of history it has, in the middle of suburbs in Canberra, so the kids and future generations can see how it used to be and how it continues to be.”

Historic homestead an island of days gone by in suburbia