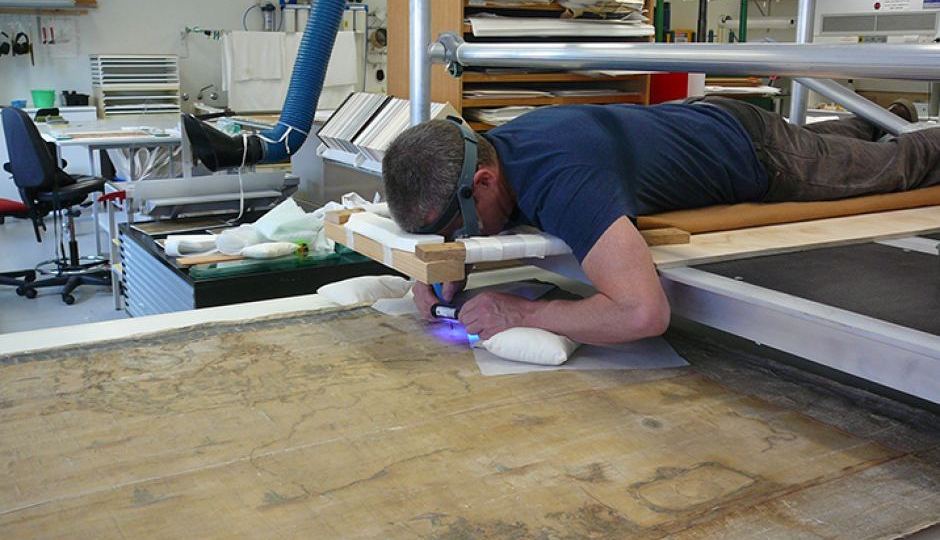 Conservator Peter Mitchelson removing varnish from the surface of the Blaeu map. Photo: University of Melbourne

A priceless 17th-century map of Australia has been mounted on a wall for the first time in centuries after undergoing extensive analysis and preservation work.

It was acquired by the National Library of Australia in 2013 after being discovered in storage in Sweden.

In May 2016, after a public appeal raised $100,000, the map was sent to the Grimwade Centre at the University of Melbourne.

“Just looking at it you thought it was going to fall apart.”

At some period in its history the map had been covered in varnish, trapping a layer of existing dirt.

There was also concern that the varnish had activated and spread the copper in the green pigment used to mark coastlines, causing further damage.

“The varnish had become very yellow and dark, the paper was lifting and curling, the whole thing had been rolled up,” Ms Cloughley said.

“[There were] cracks, tears and losses; it had seen a lot of life.”

The Grimwade Centre conservators began the painstaking work by taking hundreds of photos of the map, dividing it into a workable grid.

The specialist team spent more than 700 hours using magnification under UV lights, carefully scraping away the varnish with scalpels before removing the last traces with a gel containing solvents.

The map’s original colours – gold, green, red and yellow – emerged in brighter focus, as did the black text in the surrounding panels.

“All of that pigment and the colours used were all there, it was just obscured by all of the varnish,” Ms Cloughley said.

“You really couldn’t appreciate the extent of it until they removed the varnish.”

Constantly watching for signs of deterioration

The Blaeu map will be displayed in the NLA’s Treasures Gallery until mid-2018, mounted on a slightly angled board to minimise the possible effects of gravity.

Its NLA guardians are also keeping a close eye on it, alert for any further deterioration.

“We have tested the map using one of our new pieces of equipment, a colour spectrophotometer … [which measures] changes in the colours before they become perceptible to [the] human eye,” Ms Cloughley said.

“We’ve done our testing before it went on display, we’ll do some testing while it’s on display, and then we’ll do another round of testing after … [to] make sure nothing’s happening in between.