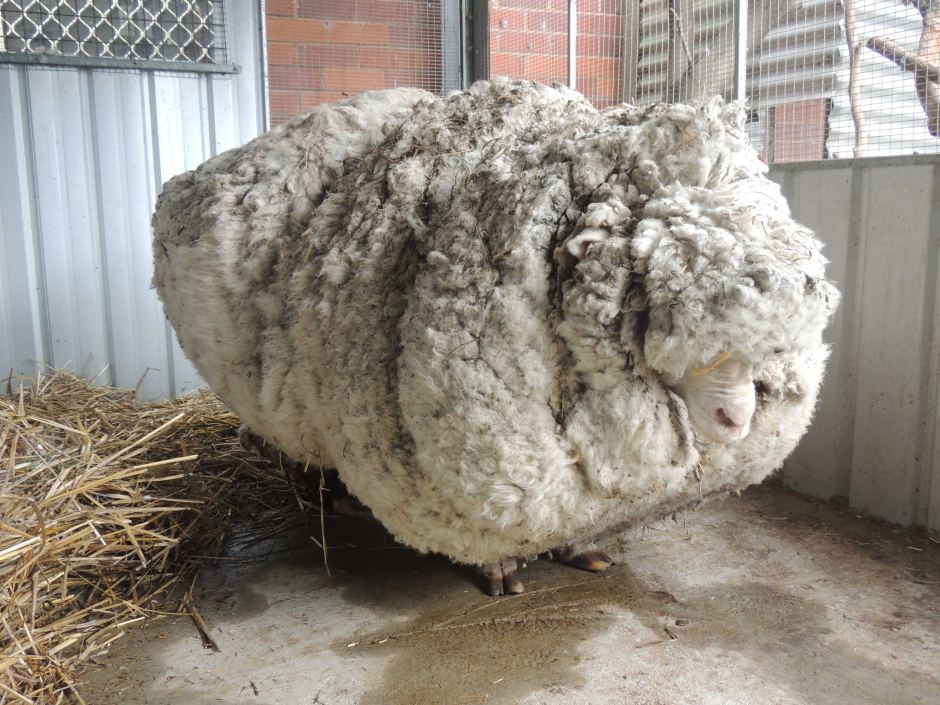 Wool shorn off an overgrown sheep found near Canberra on Wednesday has set an “unofficial” world record for the heaviest fleece removed in one shearing, the RSPCA says.

It smashed the previous world record held by a sheep in New Zealand called Shrek, whose fleece weighed 27 kilograms.

• Shane Warne writes an open letter to Nick Kyrgios
• How hackers are able to hold your iPhone to ransom
• The most beautiful, isolated towns on earth

On Thursday morning, a national shearing champion took on the challenge to clip the sheep, which was rescued by RSPCA staff after being reported by a member of the public.

It was so woolly its life was at risk, as sheep can develop serious medical conditions if they are not regularly shorn.

Vets were worried the animal could die from shock during the shearing, so it was sedated during the process.

The RSPCA estimates the sheep, which could barely walk due to the mass of wool, had not been shorn in more than five years.

An average fleece that has not been shorn for 12 months weighs about 5 kilograms and takes three minutes to shear.

Mr Elkins said it was a difficult job.

“It was a challenge but the sheep was calm and the vets gave it a mild sedation before we started the shear,” he said.

“We started on the belly, just laid it on its back, kept it comfortable.

“There were parts of the sheep where we had to cut it in different layers because the problem for me shearing it was the weight of the fleece was pulling on the skin and we wanted to keep the skin cuts to a minimum.”

After shearing, the sheep weighed in at 44 kilograms.

Sheep to be put up for adoption: RSPCA

With 35 years in the sheep shearing business, Mr Elkin said he had never seen anything like it.

“I’ve shorn a few sheep with two years’ worth of fleece unshorn, they would cut 10 or 12 kilos,” he said.

“Sheep are shorn every 12 months and an average weight would be 5 kilograms. For this to cut over 40 kilograms and smash the world record, Shrek the New Zealand sheep, he cut 27 kilograms, it’s unbelievable.”

One runaway Tasmanian sheep, known as Shaun, lived in the wild for six years and was found with fleece that weighed more than 20 kilograms.

Mr Elkins believes the fleece will not be sold.

“Because of the length of it, it’s 42 centimetres long. It will have no commercial value but it will be interesting to see what the RSPCA do with it, whether they put it in a museum or something like that,” he said.

“He’s a Merino sheep, and he needs to be sheared all the time, they’re bred for that specifically, so if you don’t do it this is what happens,” she said

“It’s actually a life or death situation… This animal would not have made it through the summer had we not done that, we were just lucky to find him when we did.”

She said the sheep was already feeling more comfortable in its own skin, and that the RSPCA would spend seven days trying to find its legal owner, before sending it to a new home.

“He’s a new man in many ways, he’s actually moving really well, he’s already eating, he actually came up to us for a cuddle.”

“If we can’t find the legal owner then we’ll put him up for adoption.”