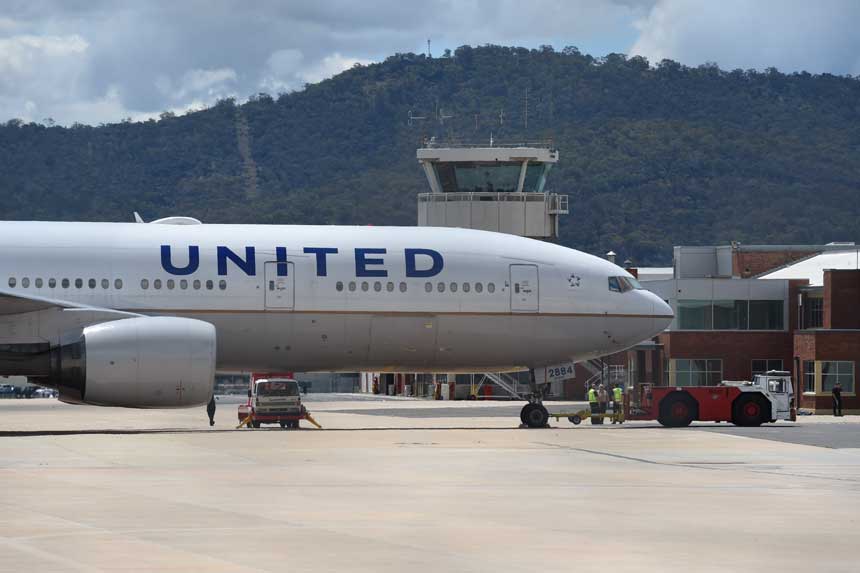 The United pilots were allegedly under the influence when breath-tested at the airport. Photo: AAP

Hundreds of passengers on a Sydney-bound international flight have been stranded for hours on the tarmac at Canberra airport after the plane was diverted.

Most passengers were unable to leave the aircraft because the domestic airport cannot process them through immigration, and the pilots have clocked too many flying hours to continue to Sydney.

The United Airlines flight from San Francisco was diverted to Canberra after debris was found on the Sydney airport tarmac, and the designated runway was shut down for 35 minutes on Friday morning.

The plane was forced to land in Canberra rather than circle Sydney because of fuel concerns after more than 16 hours of flying.

Another United Airlines flight bound for Sydney from Los Angeles was diverted to Brisbane because of the runway debris.

The flight eventually left Canberra for Sydney around 5pm.

Some passengers were allowed to leave the aircraft briefly to stretch their legs on the tarmac and were given food and refreshments.

Frustrated passengers took to social media to vent their anger.

“Seriously this no joking matter anymore. Latest is we have to wait for 2 Qantas pilots to be flown here,” one tweeted.

United Airlines apologised for the mishap.