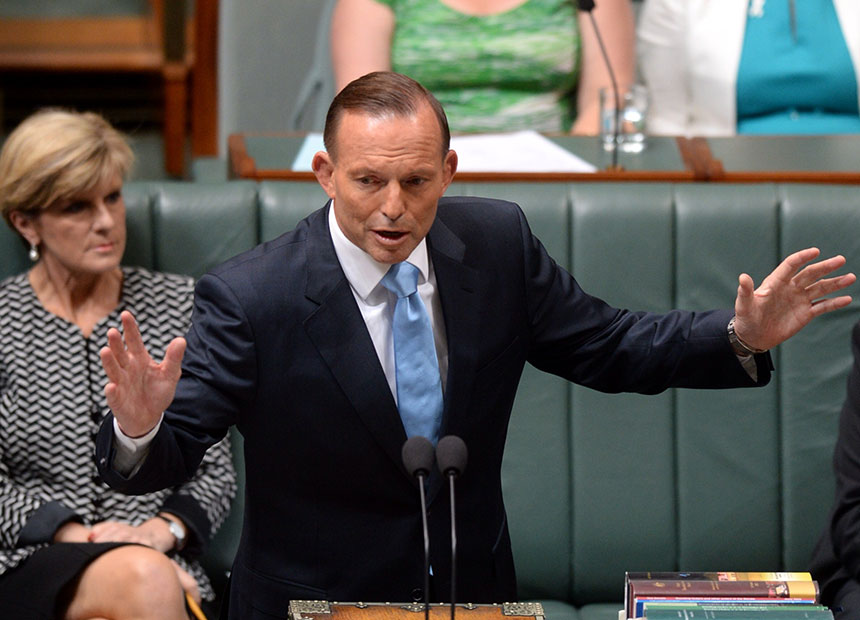 Prime Minister Tony Abbott has dodged a question about his promise not to cut funding to the the ABC, instead describing the $254 million reduction in funding as an “efficiency dividend”.

Asked by Opposition Leader Bill Shorten in question time about his election-eve promise of “no cuts to the ABC”, Mr Abbott said: “I didn’t say there’d be special treatment for the ABC.”

• Staff, shows, buildings to go in ABC purge
• It’s about the lies, not the money

Mr Abbott accused Mr Shorten of dwelling on the past.

“Everyone knew that there was going to be an efficiency dividend right across the government,” he said.

Mr Shorten responded that Mr Abbott did in fact promise special treatment for the ABC and SBS. He described the cuts as part of an “extremist, right-wing campaign to silence the ABC”.

The Opposition failed to get through a censure motion against Mr Abbott, with communications spokesman Jason Clare accusing the government of insulting the public by “lying about a lie”.

He said Mr Abbott had once placed great emphasis on telling the truth, but “he’s become the thing that he once so despised”.

“Put him on a lie detector and it would blow up because he has broken so many promises,” Mr Clare said.

Coalition MPs are among those who have joined the backlash over the cuts to the ABC, the result of the 4.6 per cent cut over five years.

Education Minister Christopher Pyne said he was “disgusted” that the ABC’s production facilities in South Australia would be closing, along with a regional office in Port Augusta.

When Mr Pyne last week organised an on-line petition to save production SA, opposition frontbencher Anthony Albanese told him to “pettition yourself” over the cuts.

But Mr Pyne said the ABC was hiding behind the cuts, and directed his frustration at the national broadcaster and its managing director, Mark Scott, not the budget bottom line.

“I am disgusted that the last production unit outside of Sydney and Melbourne is now being closed,” he said in a statement.

“It is clear that the ABC is using a modest efficiency dividend as an excuse to continue a long held strategy to centralise their television model in the eastern states.”

He said the ABC had already closed production units in other states, including in Tasmania in 2012, and it would now be restricted to Sydney and Melbourne.

“It is clear Mark Scott has taken the lazy way out.”

Meanwhile, Victorian National Senator Bridget McKenzie said she was disappointed with the decision to axe Bush Telegraph, which for 15 years has been broadcast on weekday mornings on Radio National.

It explores farming, mining, social and environmental issues in rural and remote Australia.

Senator McKenzie said she planned to raise the matter with the ABC board.

She said the decision would “decrease the voice of regional Australia at a national level”.

One of the show’s main premises has been to challenge the stereotypes of rural life and it’s been publicly lauded for drawing its audience into rural projects like growing a cotton crop, raising a pig or making wine.

Senator McKenzie claims it meets the ABC’s charter commitment to broadcasting programs that contribute to a ‘sense of national identity’.

“It does form a crucial role in connecting urban and rural Australians,” she said.

“It’s (been) letting us know the issues that are of concern to those that live in regional Australia, but additionally, it provided an opportunity for those rural and regional journalists to promote some of the less scrutinised aspects of what we do out there in the regions.

“I’m disappointed that Mr Scott has made this decision, but it is within his purvey as managing director and he’s responsible for making sure the ABC meets its budget obligations.

“I’m not completely convinced that cutting programming is his only option to meet his obligation.”

Long-time Bush Telegraph listener and interviewee Professor Snow Barlow, who specialises in horticulture and viticulture at the University of Melbourne, argues rural people will be at a disadvantage without the program.

Professor Barlow believes reducing the national reach of rural and regional content is a backwards step for Australia’s economy.

“It’s at just the very time when rural Australia and the food output from rural Australia is being looked to to take up some of the slack that will inevitably occur in our exports as the mining industry tapers off a bit,” he said.

“And we’ve seen most recently in the Japanese, Korean and now Chinese trade agreements, how important agriculture is to that.

“If we’re going to take advantage of those opportunities that exist in those arrangements, we’re going to have to be very highly connected and co-ordinated around Australia, so farmers that are in remote locations or just regional locations are aware of what is happening both economically and socially, but also scientifically, if they’re going to compete internationally for those markets.

“So it’s important socially, but it’s very important economically for Australia as well.”

Abbott on ABC: not a cut, an ‘efficiency dividend’