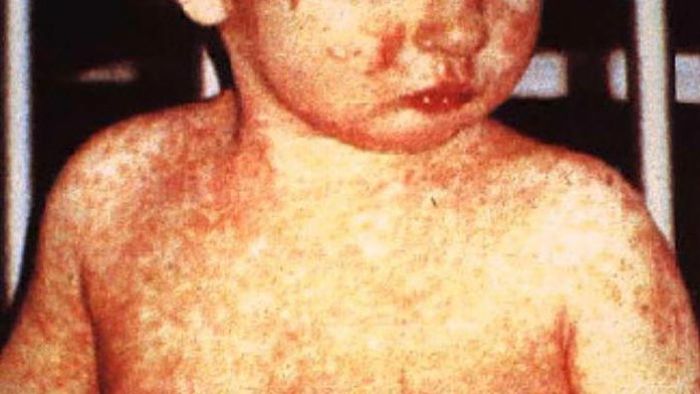 Measles has a distinctive rash which usually appears after other flu-like symptoms such as fever and a cough.

ACT Health is warning Canberrans to be aware of any measles symptoms after they were alerted to a new case in Canberra.

It is the third confirmed case in the ACT since the start of the year.

Acting Chief Health Officer Dr Andrew Pengilley said ACT Health was identifying members of the public the person may have come in contact with.

“This includes contacts in a GP surgery located on the north side of Canberra and Canberra Hospital Emergency Department where the case attended,” Dr Pengilley said.

Dr Pengilley said the public could also have been exposed at Kaleen Plaza Shopping Centre between 10am and midday on Wednesday July 16.

“We’re advising anyone who attended this shopping centre at these times to be aware for symptoms and to seek medical advice if they develop symptoms,” he said.

“The symptoms of measles may include fever, tiredness, runny nose, sore eyes and a cough, followed by a rash which appears two to seven days later.

“People generally develop symptoms seven to 18 days after being exposed to a person with infectious measles, with 10 days being more common.”

Dr Pengilley said people with measles are infectious from five days before they develop a rash until four days after.

“Measles is a potentially serious disease and is highly contagious among people who are not fully immunised,” he said.

“The virus is spread from an infectious person during coughing and sneezing or through direct contact with secretions from the nose or mouth.

“Anyone with symptoms of measles should advise their health provider before they arrive at the medical clinic so that appropriate infection control precautions can be put in place to stop the spread of the infection.”

Dr Pengilley said the most effective protection against measles is vaccination.

“Two doses of Measles Mumps Rubella vaccine (MMR) are recommended and are normally given to children at 12 months and 18 months of age,” he said.

“However the vaccine can be given at any age after nine months.”