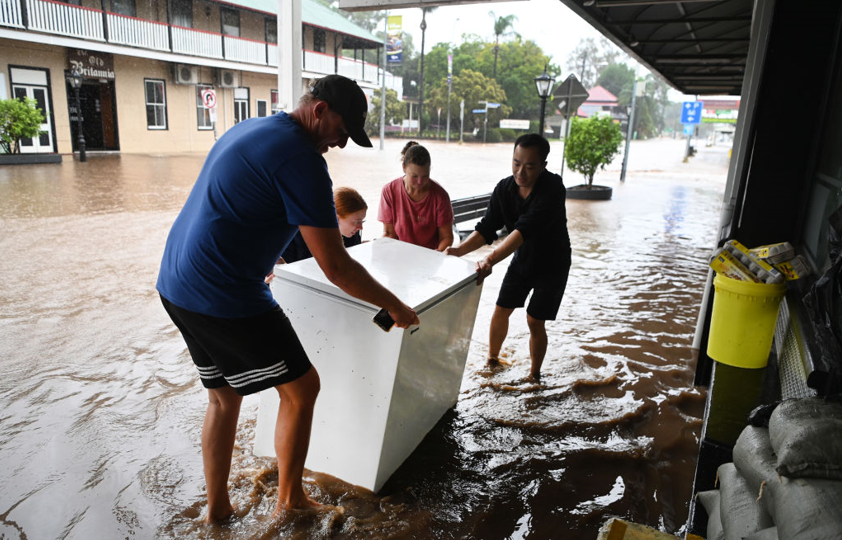 Locals chip in to help a Chinese restaurant owner in Laidley as he tries to salvage a freezer from his flooded eatery.Photo: Getty

Hundreds of Queenslanders have fled to higher ground or been rescued from floodwaters, with thousands remaining on alert as severe thunderstorms continue to pelt the state’s south-east.

On Friday night the system moved north between Caboolture and Gladstone – including Maroochydore, Gympie, Bundaberg, Cooroy, Nambour and Rainbow Beach – with a severe weather warning issued for those areas.

The Bureau of Meteorology has issued major flood warnings for the Condamine, Logan and Bremer rivers and Warrill, Laidley and Lockyer creeks.

“That’s when the situation can become potentially life threatening,” she said on Friday.

More than 700 roads are affected by floodwaters, including the Bruce Highway near Gin Gin, with Queensland Fire and Emergency Services conducting 20 rescues in 24 hours.

“This may cause dangerous flash flooding. Residents are urged to stay off roads,” the council alert said.

The worst flooding is around Laidley, Gatton and Grantham in the Lockyer Valley, west of Brisbane, to the south around Beaudesert, and in Warwick, Cecil Plains, Millerman and Killarney on the Southern Downs.

Fire and Rescue swift-water technicians evacuated residents from homes in Warwick after they were hit by floodwater on Friday afternoon.

About 300 homes have been impacted in Laidley, where the Lockyer River was gushing down William Street, the main thoroughfare, earlier on Friday.

“Started my emergency services career and did high schooling in Laidley. Never in my life I would imagine so much water in William Street,” he tweeted on Friday.

The Scenic Rim Council issued an emergency alert warning that multiple roads have been cut by the flooding Logan River.

Premier Annastacia Palaszczuk said the rain wasn’t as constant and intense as downpours that caused catastrophic floods in February, but it would linger longer than expected into Saturday.

“Please don’t be anxious,” she said on Friday.

“The key thing is to be listening to the alerts and we’ll be keeping everybody updated as much as possible.”

The Brisbane River was not expected to rise above a minor flood level, but the city council opened sandbagging stations and parts of Rocklea and Oxley were being inundated on Friday afternoon.

He urged people not to drive through floodwaters, as there had been a number of “avoidable rescues” already.

“We have lost far too many lives on our roads this year and in previous events,” Mr Gollschewski said.

A powerful easterly swell and strong onshore winds have whipped up four-metre waves, with the BOM warning of dangerous surf conditions and possible coastal erosion between Fraser Island and the NSW border.

The unseasonal deluge is Queensland’s sixth deadly flood since December, which scientists have put down to a second La Nina weather pattern in two years.

Flood alerts, rescues and evacuations: No relief in sight for rain-sodden Queensland