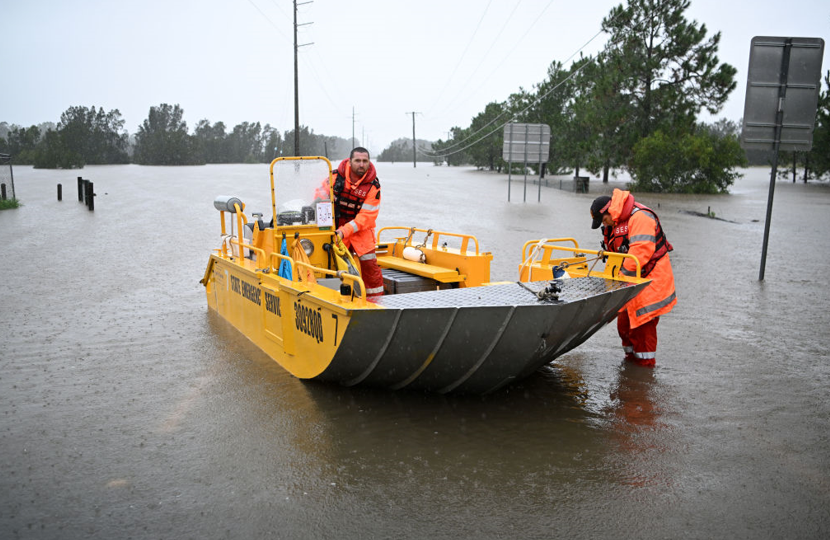 Flood-hit parts of Queensland have been warned to brace for rising waters as unrelenting rain continues and records are shattered.

More heavy rain is forecast to lash flood-hit Queensland over the next 24 hours as conditions worsen in Brisbane, where more than 1000 homes could be inundated.

Severe weather warnings remained in place in southeast Queensland on Sunday for the days-long flooding crisis that has so far claimed six lives across the state.

Flooding is widespread in the state’s southeast, impacting Gympie, Maryborough, Sunshine Coast, Ipswich and Brisbane, while major flood warnings are in place for the Mary River, Mooloolah, Noosa and Maroochy rivers, Upper Brisbane and Stanley rivers, Laidley, Lockyer and Warrill creeks, as well as the Bremer and Logan rivers.

On Sunday afternoon, the Bureau of Meteorology said the drenching would likely continue for the rest of Sunday and possibly through Monday, before starting to ease.

“With many catchments saturated, dangerous and life-threatening flash flooding and landslides are occurring, and emergency services are advising the community to stay off the roads and monitor the situation closely,” BoM said in a statement.

Earlier, Premier Annastacia Palaszczuk described the crisis as “unrelenting” and warned that floodwaters could inundate more than 1400 homes in Brisbane.

A flood warning for 16 suburbs along the Brisbane River was issued on Saturday amid fears thousands of homes could be impacted if the river broke its banks.

“I don’t want to see any more deaths. So please, please if you do not have to be out today, just stay at home because this water is unrelenting at the moment,” Ms Palaszczuk told reporters in Brisbane.

“This is a very extreme weather event that we have at the moment.”

Ms Palaszczuk said there were around 550 people Gympie’s evacuation centre, and 1040 people evacuated across the state.

Authorities expect Gympie’s Mary River to rise above its highest level in 23 years, while supplies have been delivered to an Indigenous community in nearby Cherbourg set to be cut off by floodwaters.

Severe weather was also moving to the Gold Coast, with authorities monitoring the Logan and Albert rivers and calls coming in for assistance from the Gold Coast hinterland.

Amid the crisis, water was being released from Brisbane’s Wivenhoe Dam, which was at 160 per cent over capacity. The Moogerah Dam, inland from the Gold Coast, is also spilling, as is the Atkinson Dam.

Meanwhile, the search continues for a sole sailor, in his 70s, who fell overboard from his vessel near the mouth of Breakfast Creek about 4.45pm on Saturday.

Those who died include a 34-year-old man in the Brisbane suburb of Indooroopilly whose car became submerged in flood waters overnight.

On Saturday, police divers found the body of a 37-year-old man in floodwaters near Gympie, while that of a 54-year-old man was discovered at Stones Corner in inner Brisbane.

A female SES volunteer was also killed when a car she was in was swept away en route to a rescue near Ipswich on Friday night.

The deaths follow those of a 54-year-old man killed riding a motorbike through rising water at Gympie last week and a 63-year-old found dead in a submerged car on the Sunshine Coast.

‘If it’s flooded, forget it’

Queensland’s Deputy Police Commissioner Steve Gollschewski urged people not to leave their homes unless they absolutely had to.

“We do not want to lose any more people, so please, please, if it’s flooded, forget it,” he said.

In Gympie, 700 people living along the swollen Mary River — expected to rise above its highest level in 23 years in the next 24 hours — began evacuating, while supplies were delivered to an Indigenous community in nearby Cherbourg set to be cut off by floodwaters.

Heavy rainfall and potential flash flooding are forecast from Kingaroy through to the NSW border on Sunday.

In NSW, a severe weather alert for Sunday spans 450km from the Queensland border through to Port Macquarie.

There is a risk of “life-threatening flash flooding particularly during Sunday afternoon and evening” across the Northern Rivers and Mid North Coast, in areas including Lismore, Grafton, Coffs Harbour and Dorrigo, said Gabrielle Woodhouse, Senior Meteorologist from the Bureau of Meteorology.

On Sunday and into Monday, the Northern Rivers and Mid North Coast are expected to see “widespread, high rainfall totals” exceeding 100mm, she said.

“This is falling on already wet catchments. What this means is that we’re looking at further river rises and a really increased risk of flash flooding.”

The federal government said disaster assistance had been activated for 10 local councils in Queensland’s southeast.

The funds will go to clean-up efforts in the Fraser Coast, Gold Coast, Gympie, Ipswich, Lockyer Valley, Logan, Noosa, North Burnett, Sunshine Coast and Toowoomba LGAs, and will be jointly funded by the federal and state governments.