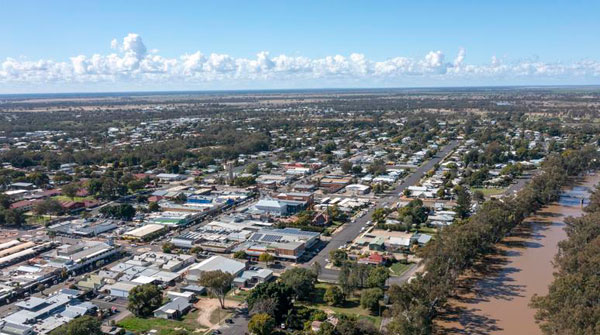 The regional town of Goondiwindi has an extremely high vaccination rate. Photo: Getty

The Queensland town of Goondiwindi has been placed on alert after three new COVID cases were detected.

Two for the cases in Goondiwindi, near the border with New South Wales, were infectious in the community for several days.

It is believed the infections are linked to a growing COVID cluster in the nearby NSW town of Moree, according to the ABC.

Two of the cases were unvaccinated while the third had one dose of vaccine.

Premier Annastacaia Palaszczuk said there was no need to impose a lockdown in Goondiwindi or its surrounding area, mainly due to its high level of vaccination.

More than 93 per cent of eligible Goondiwindi residents have received a first dose of first dose of vaccine, while 83.5 per cent are double vaccinated.

That compares to a state average of 78.5 per cent first dose and 65.3 per cent second dose.

NSW Deputy Chief Health Officer Marianne Gale said there were concerns about an increase in cases in Moree, which made up the bulk of the 103 new cases in the Hunter New England Local Health District.

“It is expected the Moree cluster will continue to grow, but thankfully, none of the COVID-positive people locally have had to be hospitalised,” Mr Marshall said in a Facebook post.

“Extra health staff from across the region have arrived in Moree to support additional testing and vaccinations in the community.”

NSW reported a total of 308 new local cases and four deaths on Thursday, ending a week of daily infection numbers below 300.

The figures mark a jump of 118 infections — a day after Premier Dominic Perrottet warned to expect daily cases and hospitalisations to increase.

The average number of Victorians being hospitalised with COVID-19, meanwhile, has dropped to its lowest level in weeks.

Victoria recorded 1247 new locally acquired COVID-19 infections and another nine deaths on Thursday, with 660 people in hospital, down from 746 one week ago.

The state’s seven-day hospitalisation average has dropped below 700 for the first time in weeks, falling from 708 to 696 between Tuesday and Wednesday.

Mr Andrews said it was a “very positive trend” and was pleased virus modelling predicting one in 10 positive cases would be hospitalised had not been realised.

Burnet Institute modelling released in September estimated there could have been as many as 2500 Victorians in hospital, once restrictions eased at 80 per cent vaccination coverage.

That modelling was updated in mid-October, suggesting high vaccination levels had reduced the chances of overwhelming the hospital system by 40 per cent – from 63 to 23 per cent.

About 81 per cent of Victorians over 12 are now fully vaccinated, after 16,209 vaccines were administered at state-run hubs on Wednesday.

Under the roadmap, almost all restrictions will end for fully vaccinated people when 90 per cent of those 12 and over are double dosed.

Mr Andrews said he was “confident” the state is on track to hit that milestone by November 24.

Currently, 94 per cent of Canberrans aged 12 and over have received two doses of a COVID-19 vaccine.

There are six people in hospital with the virus in the Australian Capital Territory, including two people in intensive care – both requiring ventilation.

There are currently 144 active cases of COVID-19 in the ACT and a cluster of cases in Canberra’s south also appears to be spreading, as two more schools and a gymnastics club are identified as COVID-19 exposure sites.