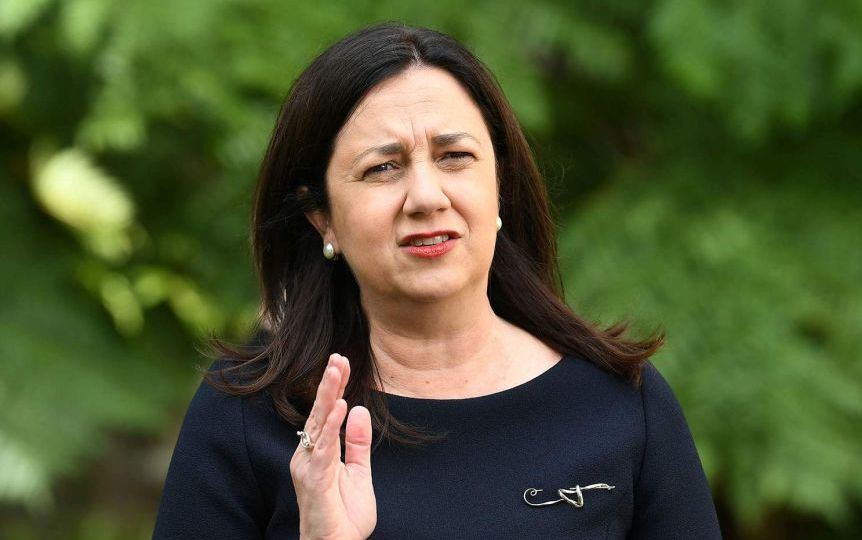 Brisbane and Moreton Bay residents will come out of lockdown from 6pm after the state recorded five new locally acquired coronavirus cases.

Premier Annastacia Palaszczuk made the announcement on Saturday morning, thanking residents for their co-operation in locking down for an extra day.

But, as she warned of multiple potential exposure sites on the Sunshine Coast, Ms Palaszczuk stressed “we are not out of the woods yet”.

She urged Brisbanites to abide by mandatory mask wearing rules and urged businesses not to allow customers into their premises without using their phones to check in.

The Premier also asked unvaccinated people over 70 to limit their time outdoors.

“Think about whether or not you need to go to a shopping centre, whether friends or family can drop some food over to you, because we do know there is virus out there,” she said.

Queensland now has 47 active cases, with authorities most concerned about three out of the five new locally acquired infections.

These include a baggage handler at Brisbane airport, whose positive result was picked up by routine testing. He is not linked to a known contact.

“We’re just urgently, of course, getting his genome sequencing result to work out where he’s acquired that,” Chief Health Officer Jeanette Young said.

A Brisbane man, 29, who travelled to Eumundi on June 27 for a holiday has tested positive and his infection has been linked to his relative who was recorded as a known positive case – a woman from the Carindale Greek Community Centre.

The man and his partner visited a number of venues in the area, which have been added to a growing list of exposure sites.

“We’ve got thousands in isolation and it’s going up every minute,” Dr Young said.

“That’s why we need the QR code because we don’t have the time to go and find all these people.

“I prefer to put more people in quarantine than ask the whole city of Brisbane to quarantine.”

Another new local case is a female healthcare worker in her 50s from Everton Park who works at Prince Charles Hospital in Brisbane. She has received her first dose of Astra Zeneca vaccine and worked at the hospital for one day while infectious.

A fourth person is linked to a cluster linked to a Portuguese restaurant and was in quarantine for the entirety of their infectious period.

The fifth new local case is a man announced on Friday, an Aroona resident, who works at Sunshine Coast University Hospital and who is also linked to the Portuguese restaurant cluster.

Queensland’s snap lockdown ended for all regions except Brisbane and Moreton Bay at 6pm on Friday.

“There are three things that will keep us out of lockdown: masks, QR codes and testing,” Mr Miles said.

Masks remain mandatory outside the home in all areas that were subject to the initial lockdown, including all 11 local government areas in southeast Queensland, Townsville, Magnetic and Palm Islands.