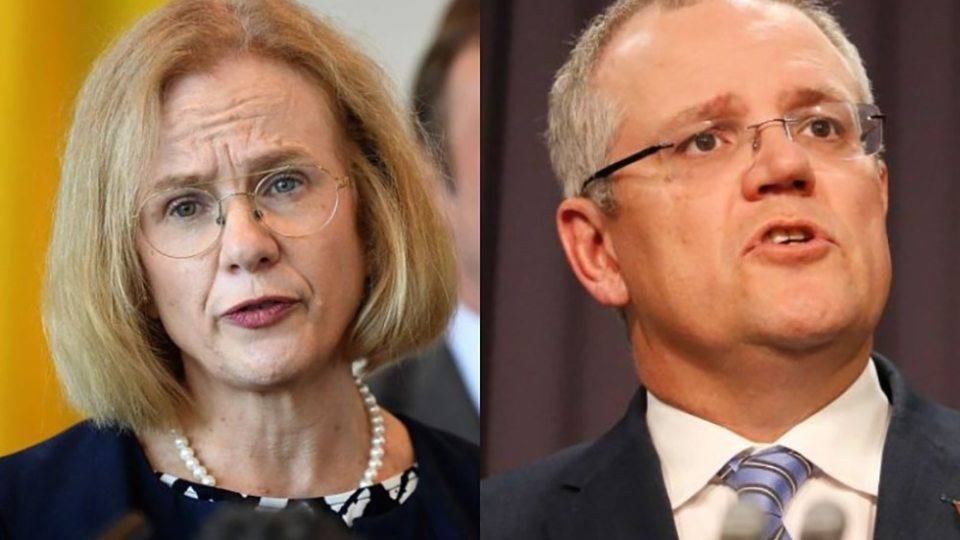 Jeannette Young, left, says she doesn't want under-40s to get the AstraZeneca vaccine, despite the PM's encouragement. Photo: ABC

Queensland’s Chief Health Officer Jeannette Young has made clear her view on people under the age of 40 getting AstraZeneca vaccinations — don’t do it.

Her remarks followed a surprise announcement by Prime Minister Scott Morrison saying anyone under the age of 40 could now approach their GP and request the AstraZeneca vaccine.

But Dr Young has rejected the Prime Minister’s suggestion.

“I do not want under-40s to get AstraZeneca,” she said.

“It is rare, but they are at an increased risk of getting the rare clotting syndrome. We’ve seen up to 49 deaths in the UK from that syndrome.

“I don’t want an 18-year-old in Queensland dying from a clotting illness who, if they got COVID, probably wouldn’t die.

“We have had very few deaths due to COVID-19 in Australia in people under the age of 50 and wouldn’t it be terrible that our first 18-year-old in Queensland who dies related to this pandemic, died because of the vaccine.

Dr Young said she “genuinely did not understand” why Mr Morrison had departed from the advice of the Australian Technical Advisory Group on Immunisation (ATAGI).

“We are not in a position that I need to ask young, fit, healthy people to put their health on the line getting a vaccine that could potentially, significantly harm them.”

Dr Young said she supported the latest advice from ATAGI that AstraZeneca vaccine should only be administered to people over 60 due to the risk of a rare blood-clotting syndrome.

She said that despite the current lockdowns and outbreak fears, there were not sufficient cases to warrant the risk.

“We are not [where] Indonesia is,” Dr Young said.

“If I was the Chief Health Officer in Indonesia, I might be giving different advice.”

Western Australia Premier Mark McGowan also said he agreed with Dr Young and that people under 40 should not get the AstraZeneca COVID vaccination, based on health advice.

“That is the advice we have and that is the national advice from the immunisation experts,” Mr McGowan said.

‘It’s a discussion for doctors’

Australia’s Chief Medical Officer Paul Kelly argued that AstraZeneca had technically always been available to anyone over the age of 18, and that the Prime Minister’s announcement related to indemnity for GPs.

“There’s a preference for Pfizer up to the age of 60. But that preference is a preference. It’s a discussion for doctors to have with their own patients and the work through their own risk and benefit in relation to that,” Dr Kelly said.

Dr Young said she would be attending an urgent meeting with the Commonwealth and other state chief health officers to discuss the confusion.

“Well, I guess that put me at odds with the QLD CHO,” he tweeted.

In response to Dr Young’s comments, he also tweeted that the debate had raised a “critical ethical principle of autonomy” and that the federal government should not be “paternalistic”.

“Adults should be allowed to consent to an intervention with a 3-in-100,000 risk of thrombosis with thrombocytopenia syndrome and less than 1-in-1,000,000 of death,” he tweeted.

“My message to Queenslanders today is: please listen to Dr Young’s advice and listen to the health experts when it comes to the vaccine,” Ms Palaszczuk said.