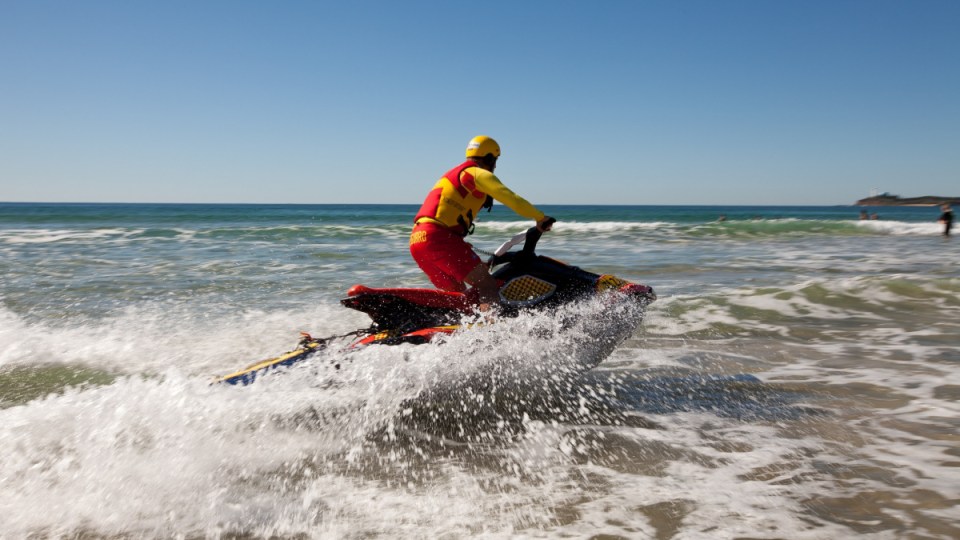 Lifeguards had been helping to search for the missing diver off North Stradbroke Island.( Photo: Supplied/Surf Life Saving Queensland

The man in his 20s was part of a group spearfishing at the popular Flat Rock dive site yesterday morning when he failed to resurface.

“We’ve been out there doing our best all night … but unfortunately we haven’t been able to find him yet,” he said.

“He was out with some friends he’d just met – they’d planned on going down and doing some spearing in the 20-30-metre mark.

“They’ve dived down as a team of two and unfortunately the young man hasn’t surfaced.”

Senior Sergeant Grey said the man was an experienced diver and there were “two possibilities” for what had unfolded.

“There’s the one where he’s gone down, released his weight belt, come up, become disorientated and potentially drifted away from the vessel,” he said.

“Or our worst-case scenario is that unfortunately he may have had something like a shallow water blackout and he’s down underneath the water somewhere.”

Police divers have been battling strong currents as they search around the dive site.

Senior Sergeant Grey said he had been in contact with the man’s family in Norway since the alarm was raised.

“Obviously they’re very concerned, as we are,” he said.

“I feel for them being in another country and not being here to understand the environment and what we’re dealing with.

“We’re throwing everything at it just to try and bring the young fella home to his family.”