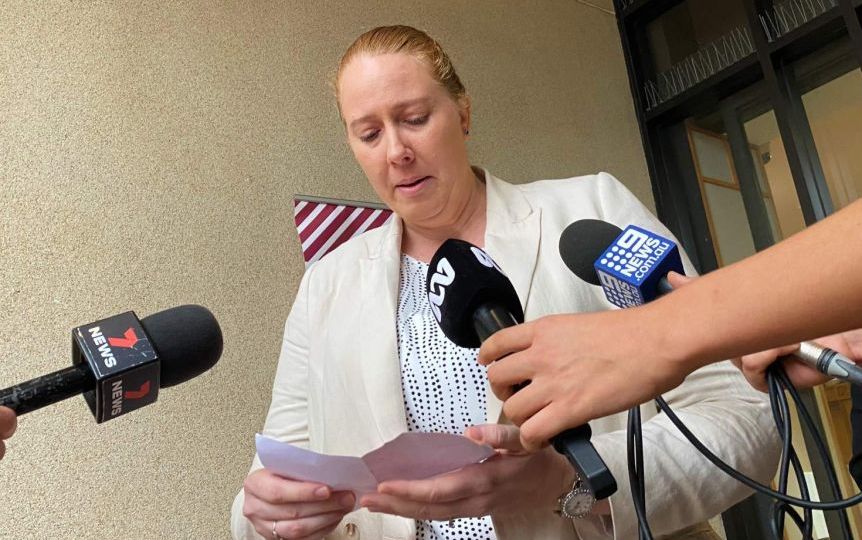 Dionne Batrice Grills read a statement outside the Cairns Magistrates Court after having a charge of manslaughter dropped. Photo: ABC News/Mark Rigby

A former childcare worker has been acquitted of a charge of manslaughter over the death of a toddler who was allegedly left behind on a minibus, after a court found she did not have a duty of care to the child.

Dionne Batrice Grills, 34, was one of two people charged with manslaughter over the death of Malik Nicholas Floyd Namok-Malamoo, 3, who was found dead on a Goodstart Early Learning Centre minibus in February last year.

Police alleged Ms Grills and her co-accused, Michael Glenn Lewis, 45, left the toddler on the minibus after collecting him from his home at Edmonton, south of Cairns.

It is alleged the boy was left on the bus for around six hours on a day when temperatures exceeded 30 degrees Celsius.

Mr Lewis was last year committed to stand trial in the Supreme Court at a date to be set.

A three-day committal hearing for Ms Grills was held at the Cairns Magistrates Court earlier this month to determine whether there was enough evidence to commit her to stand trial.

Her defence barrister Tony Kimmins argued Ms Grills had no case to answer as she was not driving the minibus that picked the boy up, and therefore had no legal duty of care.

“Goodstart policy at the time stated it was the driver’s responsibility to check the bus including behind and under all seats before locking and leaving the vehicle when it had been used to transport children,” he told the court earlier this month.

“Further, it is the driver’s responsibility to engage a second educator to check the bus where possible.

“The driver’s responsibility checklist answers the case, with due respect.”

Police prosecutor Megan Howard told the hearing Ms Grills’ employment as a childcare centre worker and her presence on the bus as it picked the toddler up meant she had a duty of care to protect the boy from danger.

“That she was on the bus, in my submission, is enough that she is capable of being committed,” Ms Howard told the court.

“She is culpable and she owed a duty of care — she held that duty and she failed.”