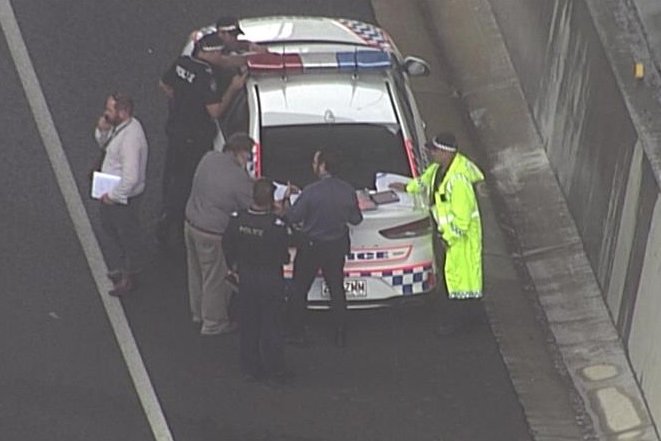 A man shot dead by police on a Brisbane motorway was on bail, armed with a knife and had previously been arrested by counterterrorism officers.

Media reports indicate the 22-year-old is Raghe Abdi from Calamvale, however police have not confirmed his identity.

Officers responded to reports of a man walking alongside the Logan Motorway and creating a hazard to drivers about 6am on Thursday.

He allegedly then threatened police with the knife before being shot.

Police gave him first aid, but he died at the scene.

Queensland Police Deputy Commissioner Tracy Linford said the man’s bail conditions included wearing a GPS tracking device, which he appeared to have cut off prior to the shooting.

“We were notified last night that there did appear to be some tampering with that tracking device,” she said.

Officers attended the man’s address twice and searched bushland where the GPS device was pinging, but couldn’t find the man or the device.

The AFP suspect he had been influenced by Islamic State and he was arrested on suspicion of an attempted foreign incursion when trying to depart Brisbane Airport for Somalia in May 2019.

He was released without charge due to insufficient evidence but had his passport cancelled.

In June 2019, he was charged with further offences including refusing to give the passcode for his phone.

He was remanded in custody after refusing to answer the magistrate or acknowledge the authority of the court, before being granted bail in September 2020.

Mr McCartney said the Queensland joint counterterrorism team opposed bail on the grounds he would interfere with witnesses, obstruct justice and fail to appear.

It’s understood the man was not subject to a current counterterrorism investigation.

Ms Linford said the officers who responded to Thursday morning’s incident did not know the man’s identity and confirmed she had seen body-worn camera footage of the shooting.

“There are occasions when lethal force is the only option available to the police,” she said.

Police are appealing to witnesses to come forward as they try to establish what happened before the shooting.

Ms Linford said footage from the highway showed a car had stopped and someone appeared to try and get the man off the road.

The Ethical Standards Command is investigating with oversight by the Crime and Corruption Commission.

They said he threatened officers with a “bladed weapon”.