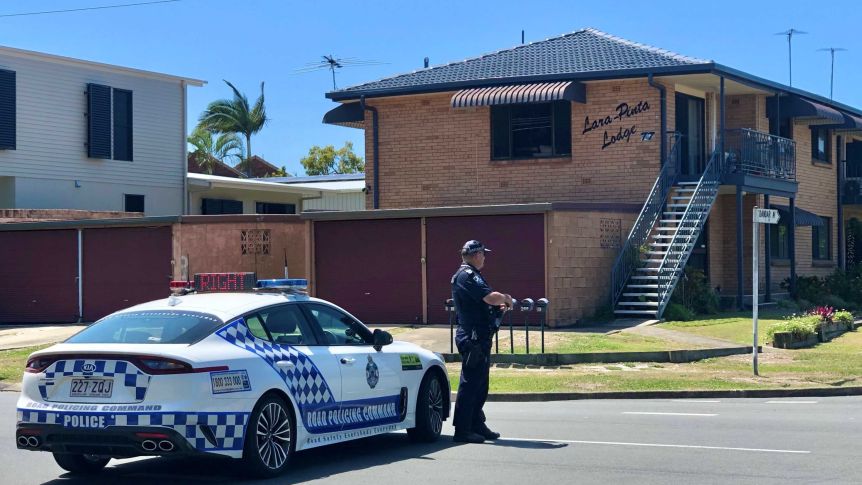 Officers were called to a property in Kelliher Street in Rothwell after a woman was shot. Photo: ABC News/Tara Cassidy

One of two men allegedly involved in the shooting of a woman yesterday has been charged after he handed himself in to police following a manhunt north of Brisbane.

Police allege a 27-year-old woman suffered a “serious gunshot wound” to the back Thursday morning before she was taken to a home in Rothwell by the two men.

Family members called an ambulance and the woman underwent emergency surgery at the Royal Women’s and Brisbane Hospital.

The alleged wounding prompted police to track a car to Bribie Island, before they implemented an emergency declaration in a bid to search for the pair.

A 27-year-old man was found hiding in a home in Bellara several hours later and taken into custody.

He was charged this morning with two counts of burglary and one count each of enter a dwelling with intent, receiving tainted property, unlawful use of a motor vehicle and unlawful possession of a weapon.

Another 27-year-old man handed himself into police in Cleveland overnight and was charged with grievous bodily harm, unlawful possession of a weapon, and dangerous conduct with a weapon.

Both men are expected to appear in separate courts this morning.

Detective Inspector Robert Hytch said the injured woman had arrived at a home in Rothwell, near Deception Bay where an ambulance was called.

“The woman was taken there and delivered to other family members so that they [could] call the ambulance,” he said.

Specialist police and dog squads were called in to assist with the search yesterday.

Local residents had reported seeing a distressed man asking for water yesterday but he ran away before he could receive help.