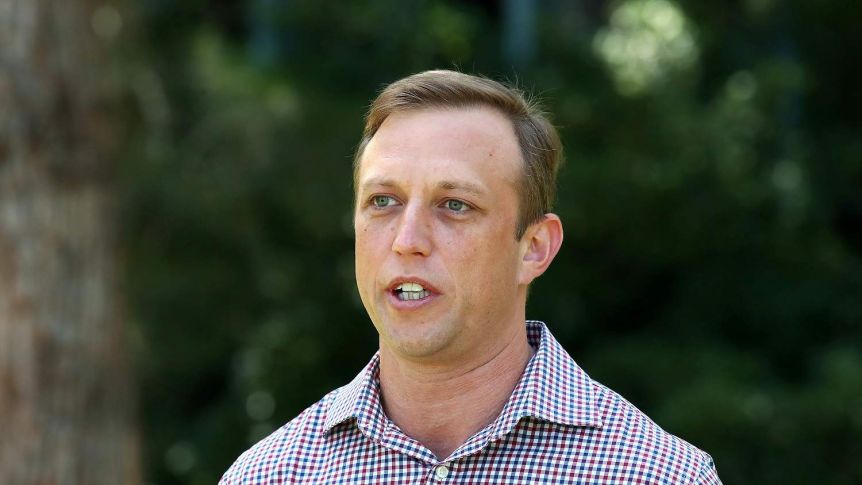 Queensland Health Minister Steven Miles has rejected claims the state is responsible for the death of an unborn twin in NSW. Photo: AAP

The federal Home Affairs Minister gave interviews today in which he referred to the border closure as being more about Labor’s re-election strategy than medical advice.

Mr Miles said Queenslanders wanted the border to remain closed and told Mr Dutton to focus on his own job, which he was “failing”.

“Peter Dutton and I represent the same parts of the world, and if he wants to I’ll challenge him,” Mr Miles said.

“He and I can go for a walk in shops at Strathpine or Kallangur, the neighbourhoods we represent and see what Queenslanders think.

“I’d just note that he is one of the few people to have actually, personally brought COVID-19 into Queensland.

“He knows personally how terrible this disease is. He should know better than anyone how important it is that we keep the virus out of our state.

“Peter Dutton has one job, and that’s keeping our borders safe and he has consistently failed.

Mr Dutton said the state government was keeping border restrictions in place as a strategy in the lead-up to the state election.

“I’ve said all along that if she [Premier Annastacia Palaszczuk] is adhering to the medical advice, fair enough, if decisions are being made for other reasons, for political reasons, or because an election’s coming up then [she] should be transparent about that,” he told 2GB radio.

“It’s driven by politics at the moment, which I just think is frustrating a lot of Queenslanders,” Mr Dutton added on a separate interview on Channel Nine’s Today show.

“It’s not based on medical advice and that’s the Prime Minister’s point as well.”

“I’m not asking the states to tear down their border restrictions, I’m just asking them to use common sense,” he said.

“We always must listen to the medical advice … that is what the LNP has always said,” she said.

“The borders can’t be ‘set and forget’, and if medical advice changes then so should the border controls.”

She said she would support a national border agreement particularly relating to medical emergencies and conditions, and for agriculture and transport industries.

However, Chief Health Officer Dr Jeannette Young said she would recommend no changes to border restrictions.

Dr Young said the health advice was to minimise the movement of people in and out of areas with high numbers of cases.

“Here in Queensland we have six active cases and that means we need to protect that,” she said.

“The best way of protecting it is for people to not go to places where there are active cases.

“We do have some exemptions for that, we can’t be as strong with our domestic borders as we are with our international borders.

“That’s why we’re allowing people who work in the construction industry, the resources and mining, and agriculture industry to continue to move over the border.”

Dr Young added that she was concerned about the amount of movement out of Sydney into northern New South Wales.

“If the virus were to get out into the Tweed area, that would be a very big concern for us in Queensland,” she said.

No new cases in detention centre

Dr Young announced this morning that there had been no new coronavirus cases at the Brisbane Youth Detention Centre in Wacol, west of Brisbane, after a supervisor returned a positive result yesterday.

The 77-year-old woman from Ipswich worked five shifts at the centre while she was infectious, but it is still not known how she contracted the virus.

All 127 inmates and 525 staff members are undergoing coronavirus testing with the inmates also isolating in individual cells.

The facility remains in lockdown.

Mr Miles said 56 tests from the detention centre had all returned a negative result but scores of test results were still outstanding.

Genomic sequencing is underway to see if the supervisor’s case is linked to the women who allegedly entered the state without quarantining after a trip to Melbourne.

Results are expected within the week.

Queensland has six active cases, with two on the Gold Coast, two in Townsville, one in West Moreton and one in Metro North.

Four patients are in hospital but none are on a ventilator.

Mr Miles said an historic case was picked up overnight and would be added to the state’s count, adding that it was identified from a “known historic cluster”.

Dr Young said the case was picked up on serology.

“It’s of no concern and we can actually link it back to a known outbreak that occurred earlier on in the pandemic,” she said.