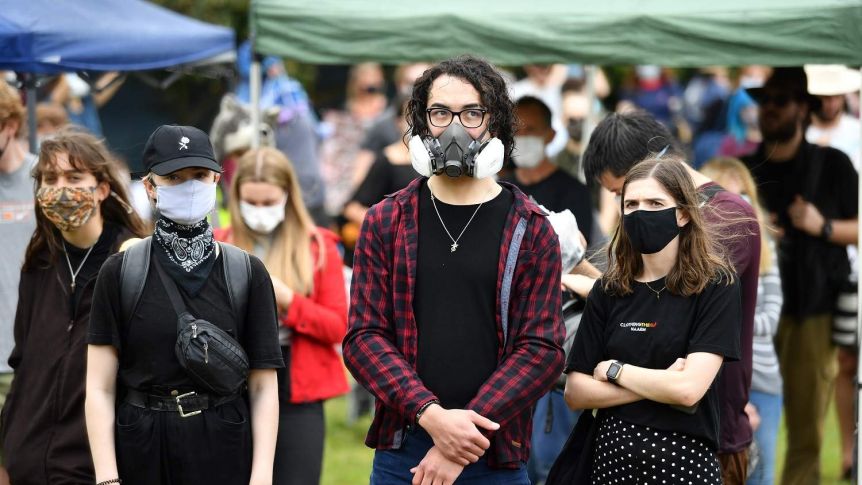 Hundreds of people have rallied outside a hotel in Brisbane where refugees and asylum seekers are being detained.

The Supreme Court this week banned the group from a sit-in on the Story Bridge, but organisers moved the midday rally to nearby Raymond Park in Kangaroo Point.

It is the second weekend in a row the sit-in was called off in response to last-minute court action.

About 3,000 people had said on social media that they were interested in going to today’s protest but about 200 showed up and endured a burst of heavy rain.

Some of the group dispersed while the rest huddled under pop-up tents waiting for the weather to pass, chanting: “We won’t stop till they free the refugees.”

Under the latest court injunction, protesters were prohibited from stopping and sitting down on both the Story Bridge and Main Street, which feeds the bridge.

Dozens of police officers have manned the streets surrounding the park and outside the Kangaroo Point Central Hotel, where the refugees and asylum seekers — totalling about 100 — are being detained.

The group marched from the park across to the hotel, disrupting traffic momentarily before one protester stopped and sat in the middle of the road on Main Street.

A large group of police swarmed in ready to remove the man but he voluntarily left the road after a few minutes.

A spokesman for the group, who only wanted to be known as Robbie, said he believed the “high” police presence was to try and intimidate protesters.

“We haven’t done anything violent here in the past. There’s not even that many people here.”

One man who is being held in detention in the hotel spoke over the phone, telling protesters he wanted to thank them all individually one day.

“I think that will be soon,” he said.

“Don’t give up on us. This is much, much bigger than a couple of refugees in detention … It’s much bigger.”

Another call from a detainee was played to the crowd.

“Refugees are humans like everyone else,” the second man said.

“We need your help, this is not an easy war.”

Police said they may take action if protesters failed to obey directives or entered a road unlawfully, and fines would be handed out for those found not to be social distancing.

“It is not illegal to stand in a park on a Saturday afternoon and say ‘no more’ to a disgusting regime of torture, murder and indefinite imprisonment,” the post said.

“There’s a risk of arrest at this protest, as with all protests that defy the state.

“We encourage everyone who comes to know their rights.”

The group is calling for the release of about 100 asylum seekers and refugees from the Kangaroo Point Central Hotel.

They were brought to Australia from offshore detention centres under the now-defunct Medevac laws.

Last month, Acting Immigration Minister Alan Tudge said 45 of the men had their refugee claims denied and they would be safely returned to their home countries.

He could not confirm how many men had their refugee applications approved or how many were still being processed.

A 24/7 blockade has been erected outside the hotel, with protesters holding weekly actions demanding the men be released into the community by the end of the year.

In the meantime, they are calling for the men to be allowed to leave the hotel for exercise and for the end to forced transfers to high-security facilities.