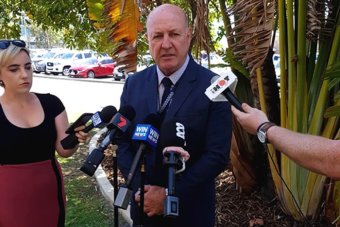 Queensland police said there could be more victims who have not yet come forward. Photo: ABC News/Amy Sheehan

A Sunshine Coast couple are facing multiple fraud charges after allegedly scamming investors out of almost $1 million by claiming to be kickstarting the career of a young country music singer in Nashville.

Police said the pair, a 41-year-old woman and 44-year-old man from Mount Coolum, were friends of the 23-year-old Australian singer.

Police will allege they approached friends to ask for an investment in her career, in return for regular payments based on her success.

Detective Acting Inspector Daren Edwards said there were no written contracts and the investment discussions were made over email, with the pair collecting around $900,000.

“As investors put money into the enterprise, some of the money was then given to some of the other investors to appear to them that they were receiving some funds back, but that wasn’t the case in the long term,” Inspector Edwards said.

It’s understood the scheme started in 2014.

It came to police attention in 2015 when a man claimed he had paid $250,000 to the couple but had received no returns on his money.

“That investor withdrew that police complaint … he had received some money back, however is still short of about $170,000,” Inspector Edwards said.

It was only when more complaints were made to detectives this year that police were able charge the couple.

Inspector Edwards said the singer, an Australian woman now based on the Sunshine Coast, was unaware of the investment scheme.

“This young lady had potential to have quite a good singing career and from our point of view she has probably been used as well,” he said.

“The ploy was to prop up her career … and these investors would receive substantial gains back from supporting her career.”

Police are alleging the couple used the money to fund their lifestyle and prop up their restaurant businesses at Alexandra Headlands, which has since closed.

“Potentially there are other victims we’re not aware of – we’re certainly exploring other parts of our investigation to identify other possible investors,” Inspector Edwards said.

The couple have been charged with five counts each of fraud and are due to face Maroochydore Magistrates Court on January 6.