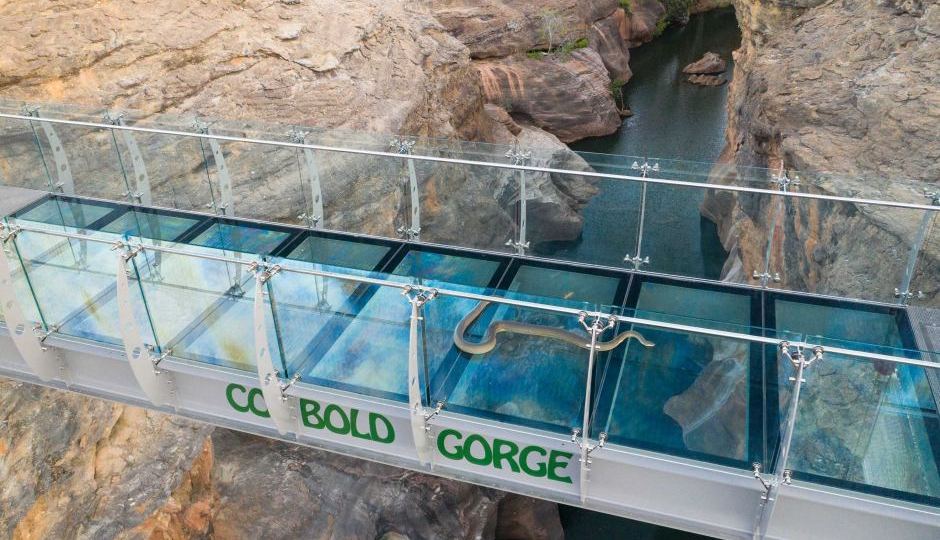 Cobbold Gorge in the Gulf Savannah region of north-west Queensland is now home to Australia’s first bridge constructed with an entirely glass surface.

The gorge, which is on private land, is about 900 metres long and in some places is only two metres wide – evidence that labelled it the state’s youngest gorge.

The glass bridge, which cost operators and the state government about $600,000, was unveiled in front of 75 people on Saturday with traditional ceremonies and a ribbon cutting.

Operations manager Hudson Fox said it was the first time there had been a bridge across the gorge and he hoped it made it easier for people to experience its natural beauty.

“Prior to us opening the bridge there were some difficult spots that some people struggled with,” he said.

“It’s making that sandstone country a lot more accessible so more people can actually come up and see the country for what it is.”

“Both of the sides of the escarpments have now been bridged by this amazing bridge and it gives you just a whole new focal point for the area,” he said.

“You can stand on the bridge right above the gorge.”

Mr Fox said there were many logistical challenges with the project, but it only took three days to install the bridge.

“With where it is and how remote it is you couldn’t really get cranes or anything like that in,” he said.

“We actually had to have a heavy-lift helicopter with a maximum load of 1.5 tonnes to lift in beams. They were 1.45t approximately each beam … the ones that actually are the main support structure for the bridge.

“Glass for the bottom layers, it was around 45 millimetres thick, then the side panels are 17.5mm thick.

“There’s a fair bit of glass there and those bottom panels weigh in at about 360 kilograms.”

Mr Fox said the deck of the glass bridge was 9.5 metres in length and presented an exciting challenge for people scared of heights.

“We have a guide that isn’t too keen on heights and he was able to walk across it on the opening as well,” he said.

“He just chose a little spot to look at on the opposite side. He stared at a tree and he walked across.

“It’s opening up many things; not just the other side of the escarpment but also people could come out and conquer their fears.”

Mr Fox said the unique bridge added to the list of tourist sites in the region.

“We’ve got so many spectacular tourism attractions here already and this is just another … jewel in the crown,” Mr Fox said.

“It’s going to bring so many more people in. It’s just that other thing that’s on the bucket list.”

Tourism and Events Queensland’s Matt Bron said the Cobbold Gorge team have been leading the way in outback tourism.

“Innovation and new experiences are key to remaining relevant in the travel industry and in the tourism landscape,” he said.

Mr Bron said over time the attraction would help increase tourist numbers in the region.

“They’ve done a lot of work out there at Cobbold Gorge over the years including the first outback swim-up pool bar and their big infinity-edge pool.

“To come along and see such world-class facilities and to be able to be involved in them; word-of-mouth spreads, Instagram and pictures spread, and it will certainly be of help to get people into the North.”

Mr Bron said private enterprise and investment in tourism was vital for the future.

“Councils and governments can only do so much,” he said.

“We need to back … our private tourism operators so that they do start to dream a bit and expand their programs and their experiences.

“They’re the ones who ultimately deliver the outcome to the person travelling.”