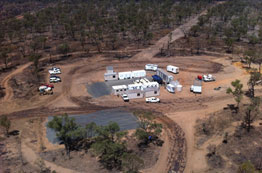 The China Stone mine project, promising more than 3000 jobs in Queensland, has been suspended. Photo: Mac Mines

Adani Australia CEO Lucas Dow said he had productive talks with the officials after Premier Annastacia Palaszczuk ordered the meeting to thrash out a timeline on the coal mine approvals process.

“The engagement we’ve had today (Thursday) and the constructive nature of the meeting has certainly emboldened us in terms of the level of support that were seeing from the Queensland government,” Mr Dow told reporters.

Mr Dow said he was looking forward to the premier making an announcement on Friday about the timeline for approvals for the Carmichael Mine.

Meanwhile an even bigger mine than the controversial Adani coal mine has chosen not to progress the project which could have created more than 3000 jobs.

The $6.7 billion China Stone, which is a sprawling mega mine next to Adani in the Galilee Basin in North Queensland, has confirmed it has suspended its bid for mining leases.

A “fed up” Queensland Premier Annastacia Palaszczuk had ordered a meeting to be held Thursday between Adani, the Department of Environment and Science, and the coordinator-general to finalise a timeline for the mine’s approvals.

Deputy Premier Jackie Trad denied the state government had performed a U-turn on Adani post-federal election after earlier insisting it would not be rushed into ticking off environmental and groundwater approvals.

Ms Trad insisted her government’s position on the mine had not changed, but she agreed the state government had heard voters.

“I certainly think the election result on Saturday night had messages for Labor at a state and federal level,” she told ABC radio on Thursday.

“I think the Carmichael mine … was part of that message, but it wasn’t the entire message.”

She said there were many other factors that fed into federal Labor’s defeat.

“The federal election was not just about Adani.”

Regional voters turned against Labor at last weekend’s federal election, at least in part because of drawn out delays plaguing Adani’s mine and the jobs it promises.

The China Stone project is owned by MacMines Austasia, a subsidiary of China’s Meijin Energy Group and had been expected to create thousands of jobs.

“MacMines has voluntarily not progressed their five mining lease applications for the China Stone project,” the Department of Natural Resources, Mines and Energy has told the ABC.

“The schedule associated with progressing a mining lease application are subject to the proponent’s commercial decisions.”

MacMines chief executive Russell Phillips told the ABC the project’s future was under discussion and he wasn’t in a position to elaborate.

But he also said it was “definitely not being shelved”.

The proposed China Stone mine site is the closest to Adani’s planned mine in the coal-rich Galilee basin.

Adani ’emboldened’ as mine approval nears