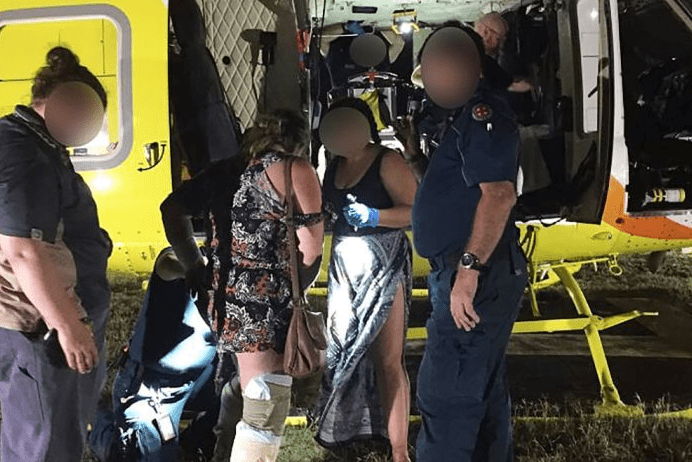 Her leg bandaged, the French mum and her boy are airlifted to hospital from Fraser Island. Photo: RACQ Lifeflight Rescue

Two Fraser Island dingoes have paid with their lives for an attack on a French tourist and her young son.

Rangers identified the animals responsible for the Thursday night mauling and captured the first after consulting with traditional owners, who agreed the animal needed to be put down.

The second dingo was euthanised on Saturday, again after Indigenous elders gave their permission.

old son were mauled on Eurong Beach when they unexpectedly encountered the pack and were running to the safety of their car.

“The couple both panicked and ran back towards the vehicle,” Queensland Ambulance Service spokesman Michael Augustus said.

“It was at that time when the pack actually chased them and attacked.”

Latest on the #FraserIsland dingo attack. The boy & woman were reportedly French tourists on holiday. They had been walking along Eurong Beach when they were confronted by a pack of dingoes & ran for their car. It was then they were chased down & attacked. Full story below. pic.twitter.com/lTiUEP0exg

The boy suffered “serious lacerations to his legs” and bite marks and injuries to his face, while his mother had “deep injuries” to her arms and legs.

The latest attack follows a similar January incident which saw a six-year-old boy bitten on the leg as he returned from a swim.