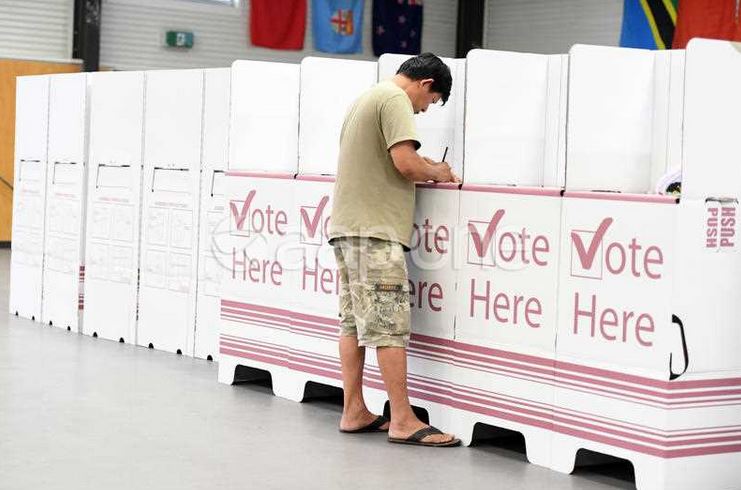 A Brisbane voter marks his ballot in an election marked by a regional divide and statewide disenchantment with major parties. AAP/Dan Peled

One in three Queenslanders sent a message to the major parties directing their vote elsewhere, muddying the waters and leaving the state with the prospect of a hung parliament.

The ABC’s election analyst Antony Green labelled the result as “wacky”, saying it was one of the toughest elections to call in his nearly 30-year career.

In terms of primary votes, Labor and the LNP have both lost ground this election.

And according to Saturday night’s figures, One Nation picked up about 14 per cent of votes across the state — that’s more than 290,000, an impressive tally until compared with what the party anticipated during the campaign.

Pauline Hanson said it was a “fantastic outcome” and they had pulled 20 to 30 per cent of votes in some regional areas.

One Nation’s bid to parachute Malcolm Roberts into the Queensland election at the eleventh hour also failed, with the former senator trailing Labor in Ipswich.

In a further body blow, One Nation may need to find a new state party leader, with LNP defector Steve Dickson failing to hold the seat of Buderim.

Whether it was a tad insincere or just sunny optimism, members of Labor and the LNP came away from Saturday talking up their performances.

However she stopped short of claiming outright victory.

Meanwhile, Tim Nicholls was more circumspect when he acknowledged neither Labor or his party had secured a majority.

“Queenslanders have not responded to Labor and the union movements’ scare campaign or their demand for a majority or nothing else,” he said.

Despite impressive showings in the inner-city electorates, the Greens found it tough to get much traction outside Brisbane.

“They haven’t done well outside of the south-east. Have a look at regional Queensland, the Greens only have 5.8 per cent,” Antony Green said.

The Greens’ best chance of picking up a seat is in Maiwar, a new inner-city electorate where their candidate is neck-and-neck with Labor in the race for second place. Even though the LNP’s Scott Emerson leads on first preferences, Antony Green has called the seat for either Labor on the Greens.

Meanwhile the Greens’ Amy MacMahon, who came close to defeating Deputy Premier Jackie Trad in South Brisbane, said she was pleased with the “bloody amazing” swing her party received.

“I think the party has never been in a stronger position,” she declared.

Still a lot of counting to be done

With only 69 per cent of the total votes were counted on Saturday night, Electoral Commission of Queensland workers will Sunday to process remaining ballots and about 400,000 postal votes – a process which could take up to 10 days.

The compulsory preferential voting system introduced this election will also slow things down. The ECQ will need to check preferences to determine winners in seats where no candidate secured 50 per cent of primary votes.

“It is the bronze medallist deciding who gets silver or gold,” Green quipped on Saturday night.

Will we eventually have a clear winner? Possibly not, and that’s where things get tricky.

Expect political spin from the two major parties to go into hyperdrive if neither manages to get the 47 seats needed to govern outright.

On November 20, Ms Palaszczuk vowed not to accept the support of One Nation, the Greens or the Katter’s Australian Party (KAP).

But on Saturday night she changed her tune as KAP looked poised to win two seats.

“I will never sell out the needs of Queenslanders by doing a deal with One Nation,” she said, notably failing to mention the other parties she earlier scorned.

LNP Leader Tim Nicholls, who has appeared more open to working with crossbenchers, was quick to ramp up the pressure on Ms Palaszczuk.

Queensland election: The big loser? Support for the major parties