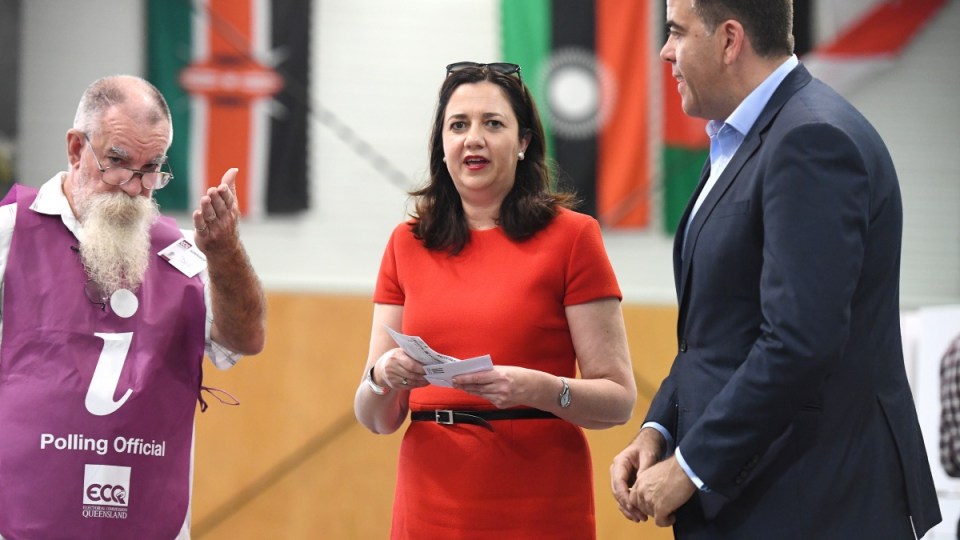 Queensland Premier Annastacia Palaszczuk’s government is leading and appears on track for a majority with swings against Labor in the regions offset by increased support in the state’s southeast.

At 9.30pm, Sky News projected Labor was on track to win the election, but the ABC’s election expert Antony Green saying the race was still too close to call.

With 70 per cent of the vote counted, Labor was projected to win 42 seats, with the Liberal National Party opposition on 37 and 12 seats still too close to call. Labor needs 47 seats to form a government in its own right in the state’s 93-seat unicameral parliament.

Labor needs 47 seats to form a government in its own right, but has ruled out working with One Nation if it falls short of a majority.

One Nation was set to win about 12 per cent of the statewide vote, though its leader Steve Dickson, who defected from the LNP, was unlikely to hold his Sunshine Coast seat of Buderim.

Despite predictions Pauline Hanson’s party would hold the balance of power, it was also unclear if One Nation would end the night with even one MP, though its candidate was ahead in the Townsville seat of Thuringowa.

When polls closed, a Nine News-Galaxy exit poll found Labor on track to win 52 per cent to the LNP’s 48 per cent on two-party terms.

Deputy Premier and South Brisbane MP Jackie Trad, who is attempting to fend off a strong challenge from Greens candidate Amy McMahon, was narrowly ahead with 47 per cent of the vote counted.

One Nation’s Queensland leader Steve Dickson, who defected from the LNP, was set to lose his seat of Buderim on the Sunshine Coast.

Former One Nation senator Malcolm Roberts failed to win the seat of Ipswich from Labor.

A Labor win would undoubtedly be used by the Federal Opposition and internal critics within the Turnbull government to further heap pressure on the Prime Minister ahead of the final two weeks of Parliament on Monday.

Earlier, Ms Palaszczuk spent the day criss-crossing the state before she returned to her electorate of Inala, in Brisbane’s southwest, to cast her vote.

Mr Nicholls was targeted by protesters opposed to the Adani Carmichael coal mine projected while arriving to vote at a church in the north-west Brisbane suburb of Hendra.

The Adani mine project – which is popular in the regions but less so in Brisbane – has been a key issue in the campaign, with Ms Palaszczuk dogged by repeated questions over Labor’s position.

Mr Nicholls has struggled to answer questions about whether he would work with One Nation to form government. Labor ruled out such a move early in the campaign.

Senator Hanson spent most of the day campaigning with Mr Dickson in the seat in the Sunshine Coast.

Queensland election: Labor ahead and likely to stay there